Text description provided by the architects. Yuyuan Station on Shanghai Metro Line 14 is located in the heart of the city, adjacent to the ChenghuangMiao (City God Temple) and the Bund. This area is a cultural landmark in Shanghai, which combines the East and West, historical and contemporary styles. Yuyuan Station serves not only as an important node for public transportation in the city but also as a gateway to this area and a starting point for tours. 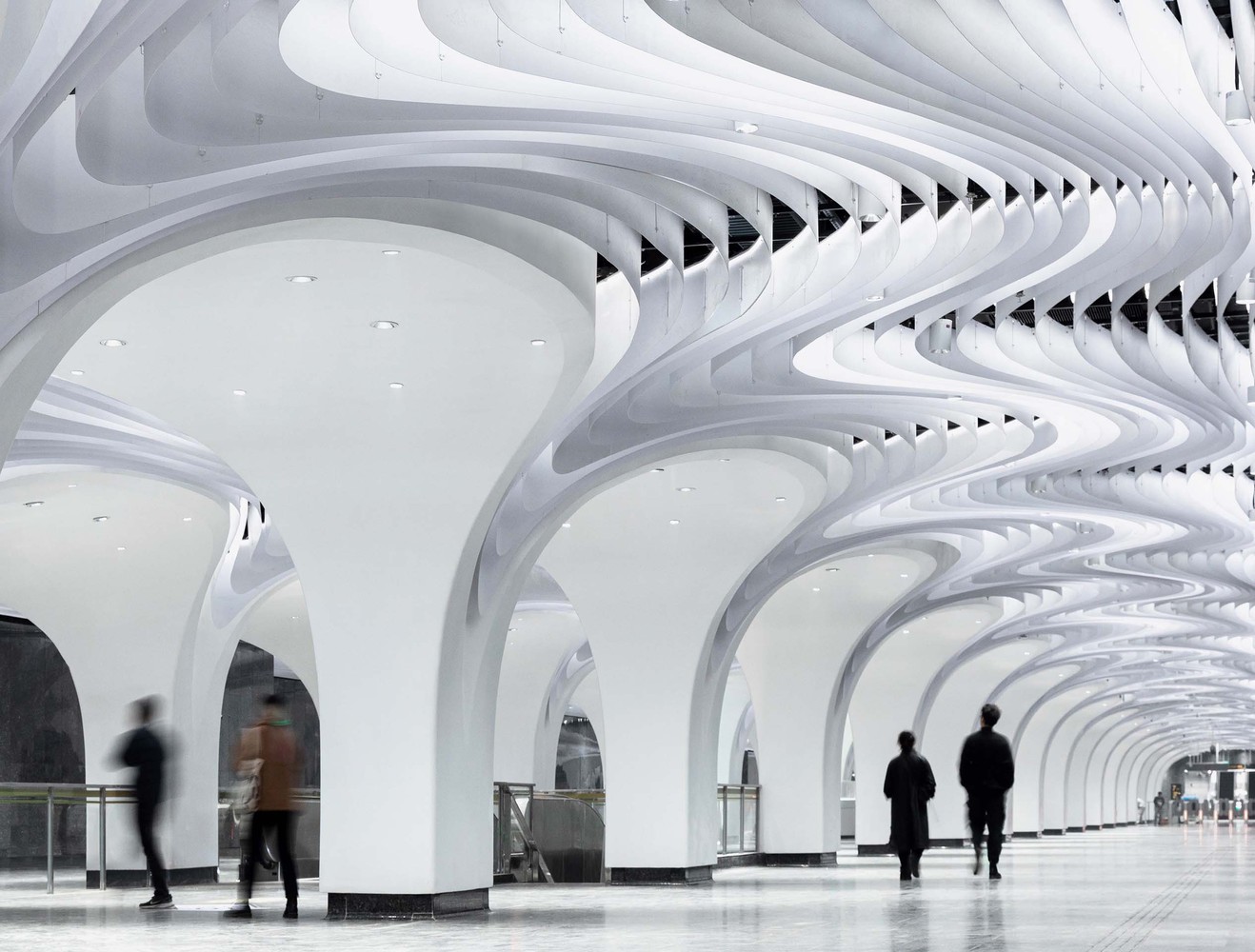 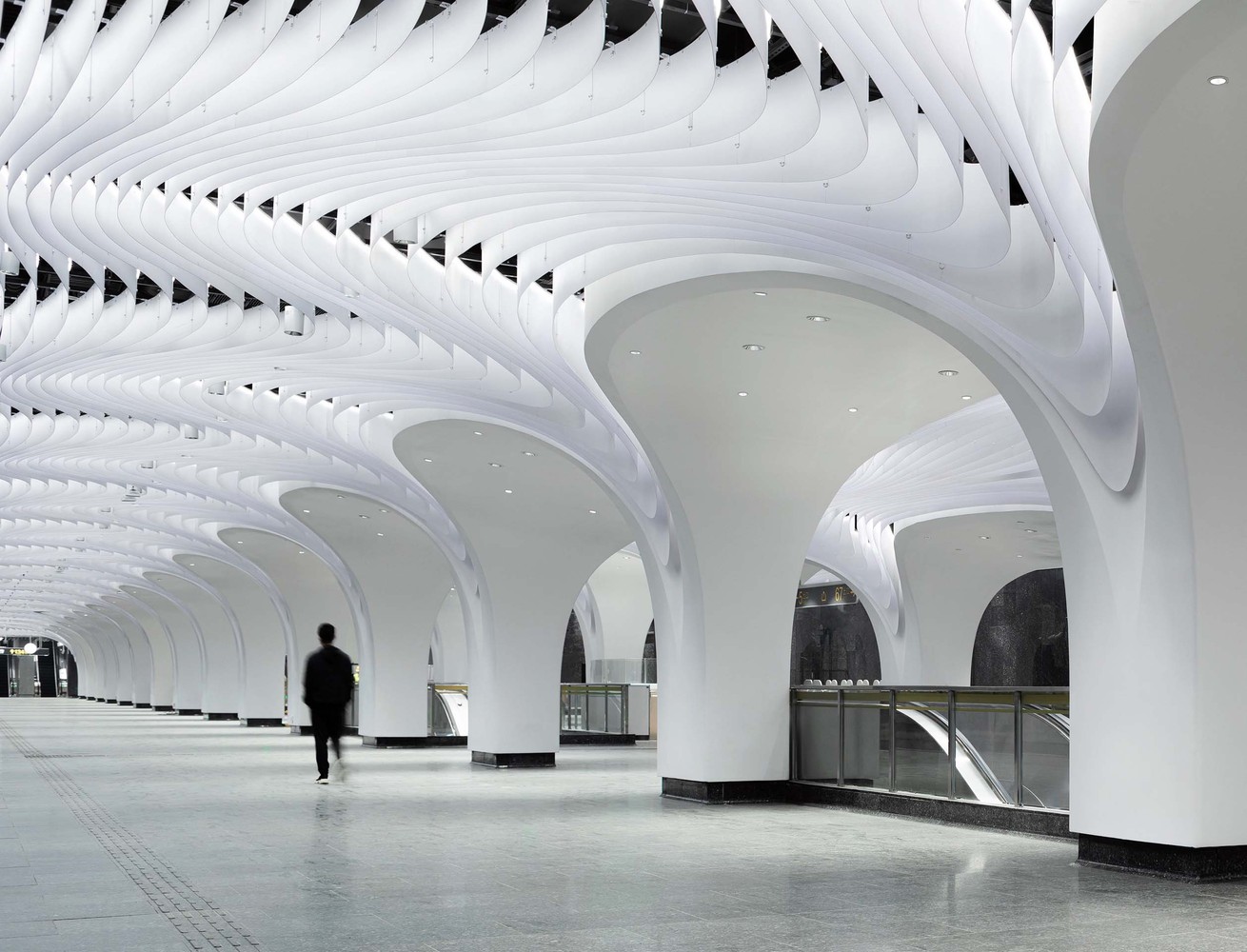 As the deepest subway station in Shanghai, the civil conditions such as walls, columns, and floor layers cannot be changed, which brings challenges to the interior design. Moreover, the cultural elements in the station area are rich, then how design responds to the site elements is a proposition that cannot be avoided. 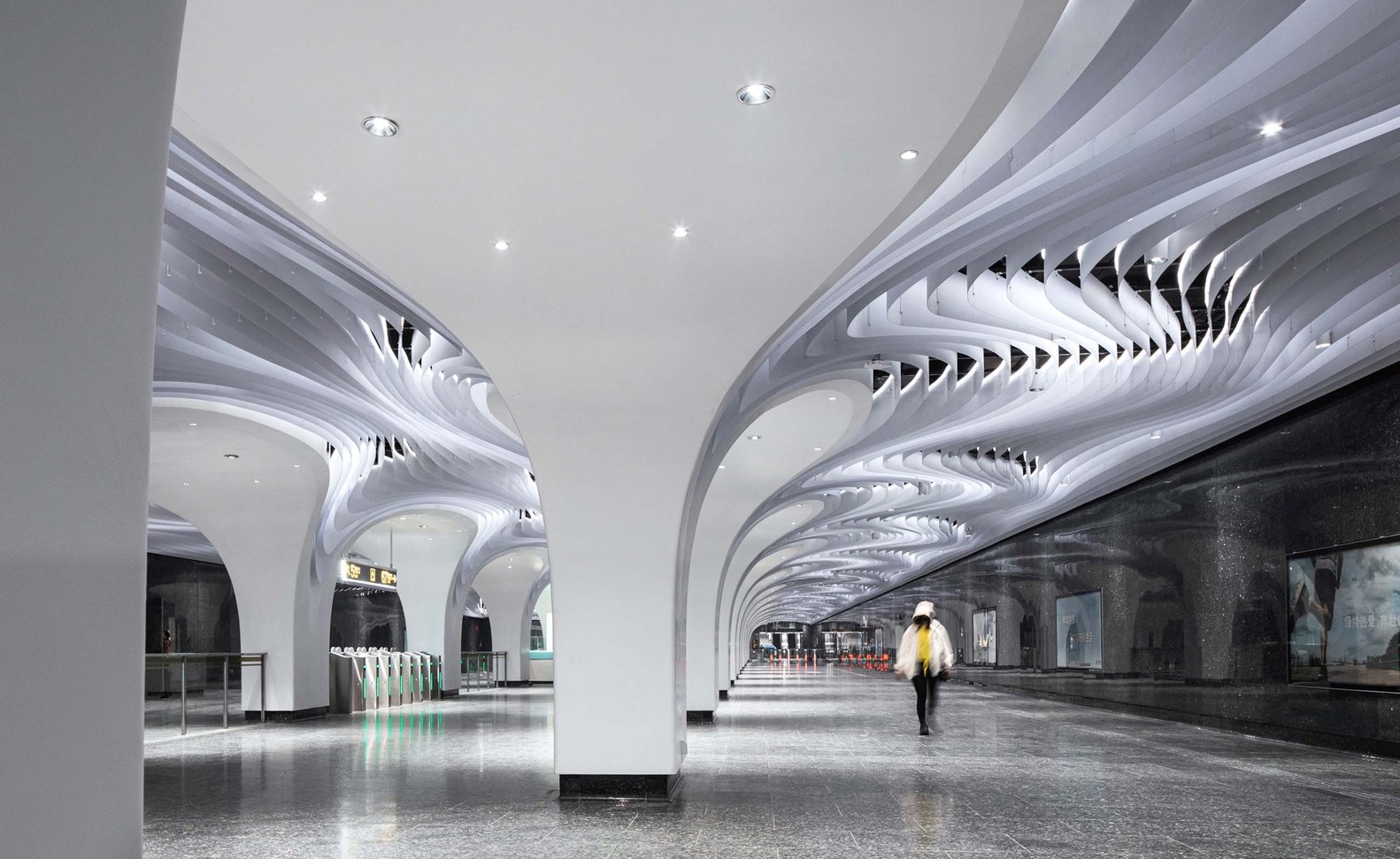 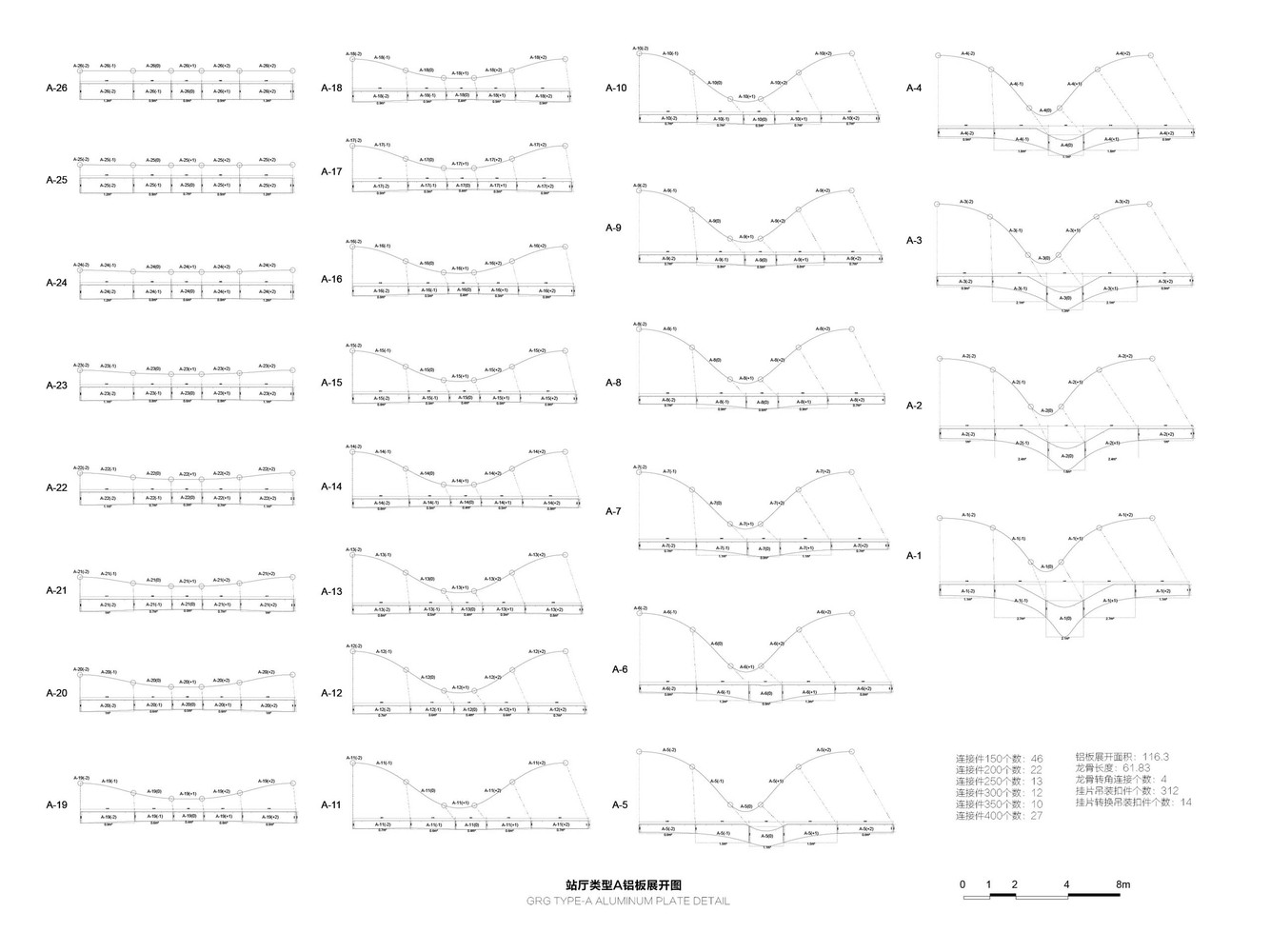 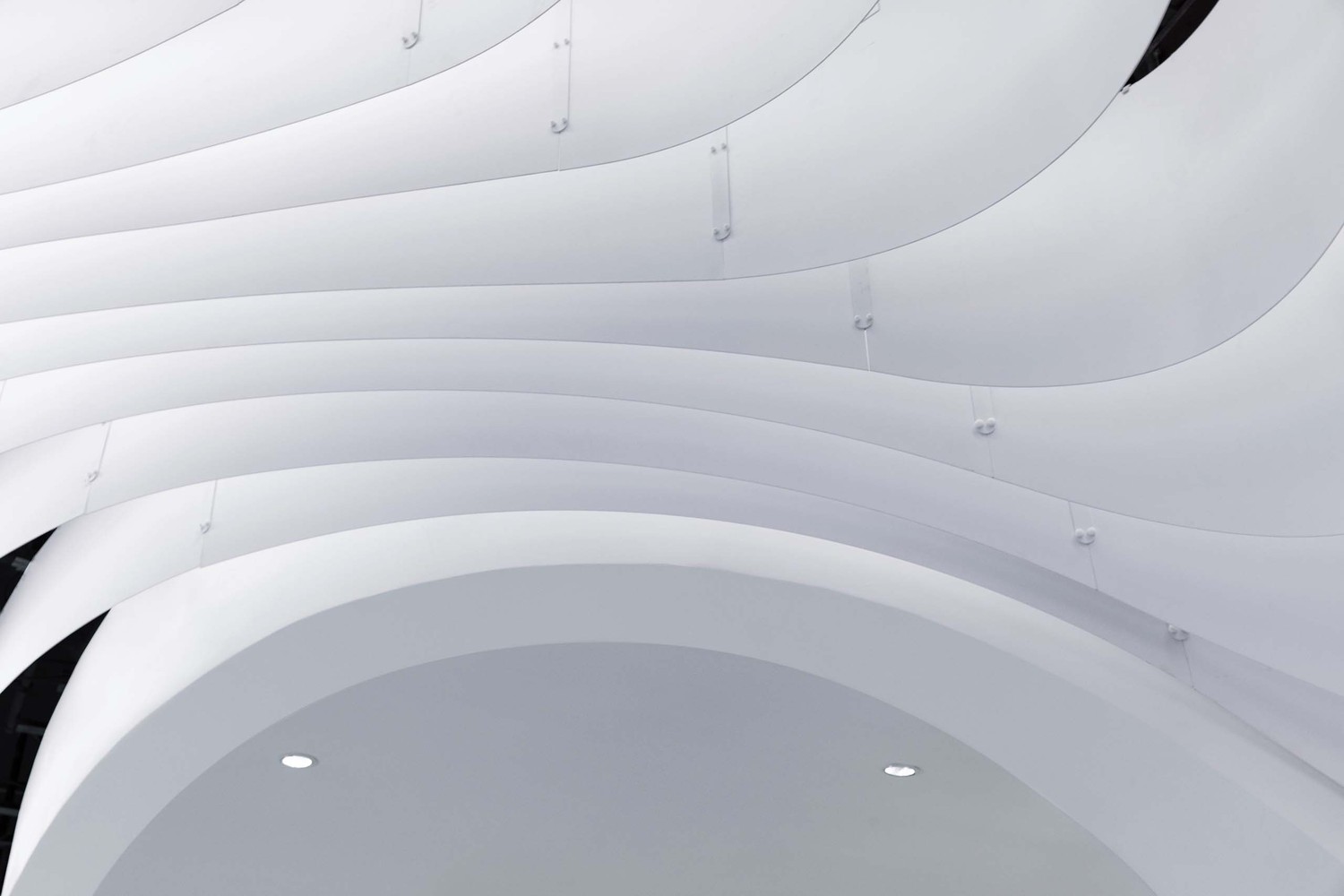 The curved water-wave ceiling visualizes the illusion of the Huangpu River above this metro line. These "waves" lap onto the columns, creating a rhythmic pulsation. --If the subway is compared to the arteries of the city of Shanghai, then at Yuyuan, the deepest station, it is as if you can feel the pulse of the city. 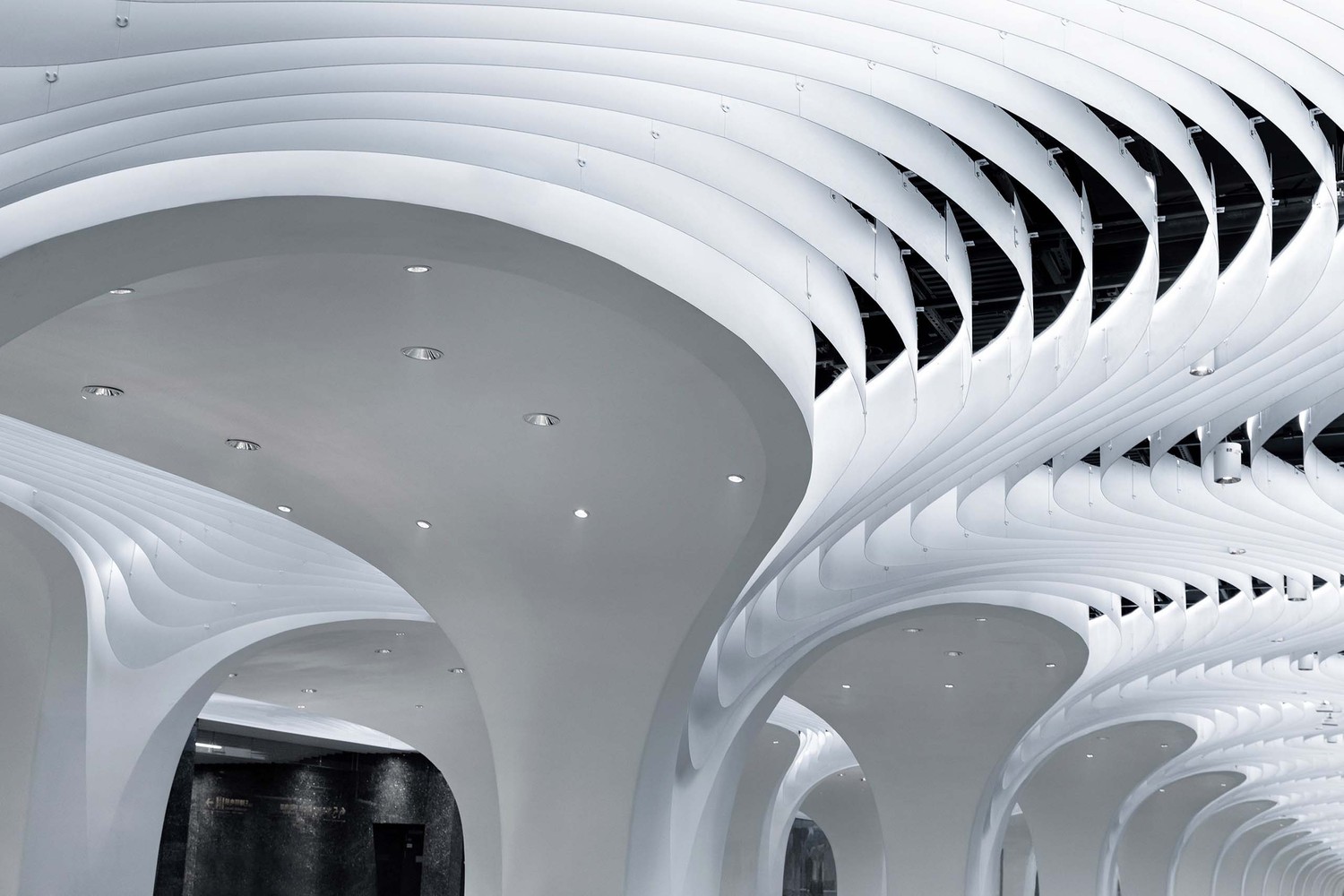 These "waves" lap onto the columns, creating a rhythmic pulsation and an arcade. The curvature of the "wave tip" is extracted from the Chinese eaves of the City God Temple. It subtly and implicitly echoes multiple cultural elements of the site. 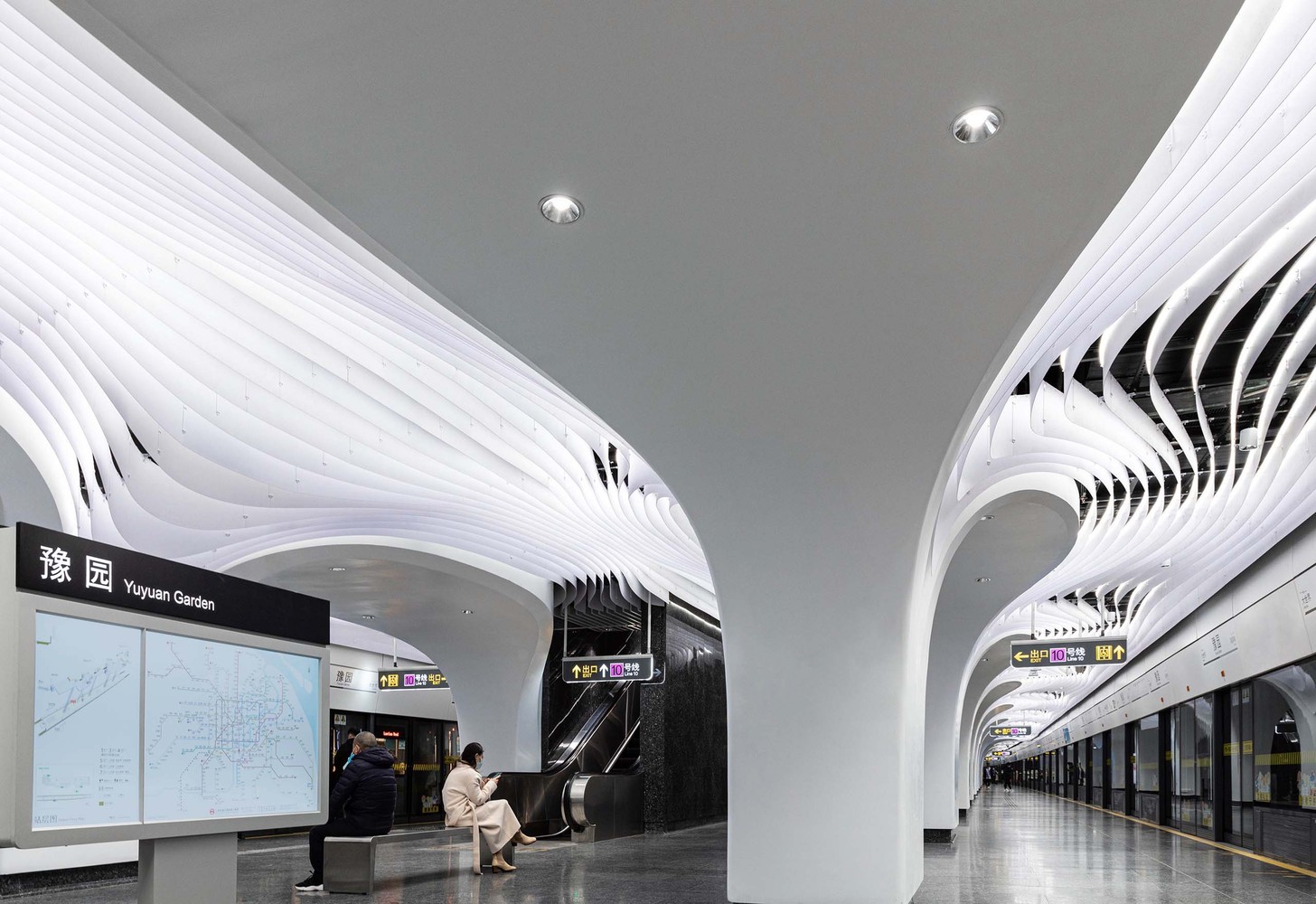 The plan of the Yuyuan station is shaped to accommodate the track splitting and merging, and the distribution of ceiling pipes in the station hall is not homogeneous either. Therefore, the curved units cannot be simply repeated. Parametric design technology is adapted to generate forms and optimize the number of non-standard units on the basis of fitting to changes, in order to control the cost of mass production and installation. 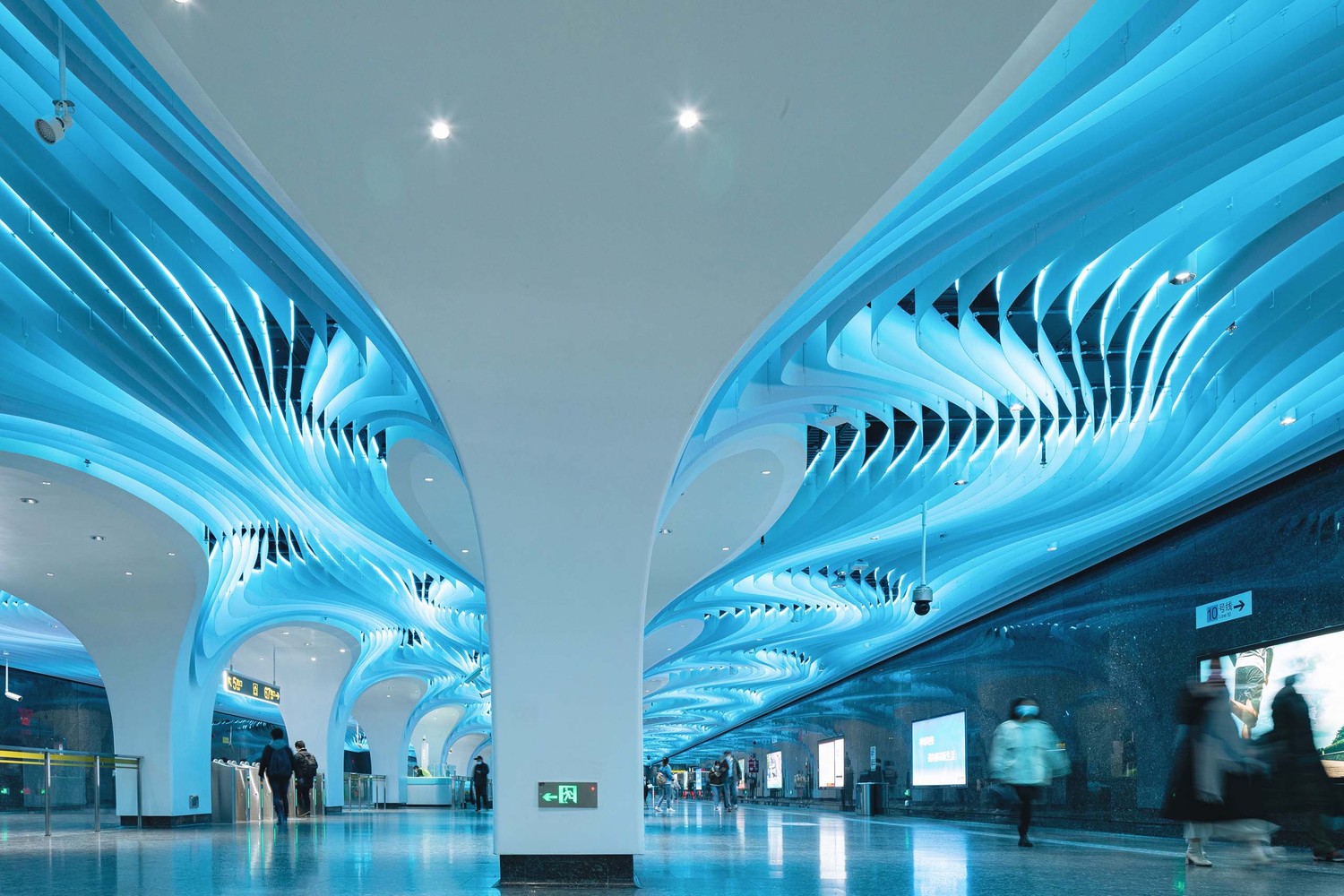 The water wave ceiling is made of tens of thousands of aluminum panels, cut, bent, and spliced. The ceiling system is combined with lighting to form a large three-dimensional LED canopy that can present a variety of light effects. It is able to present different lighting performances, according to different holiday events, Such as a China-Red for the National Day and the Spring Festival, Pink and flower petals for Valentine’s Day. 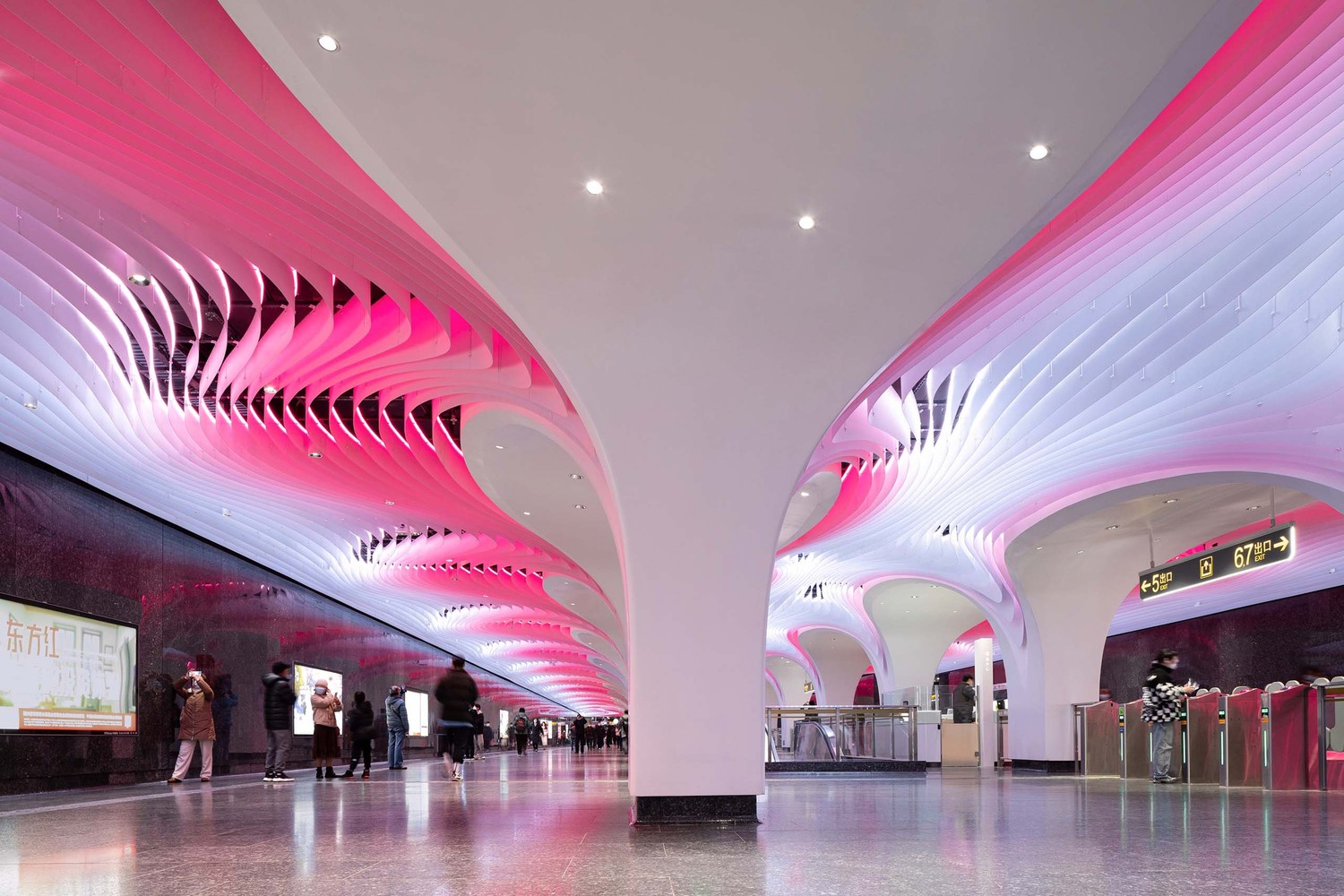 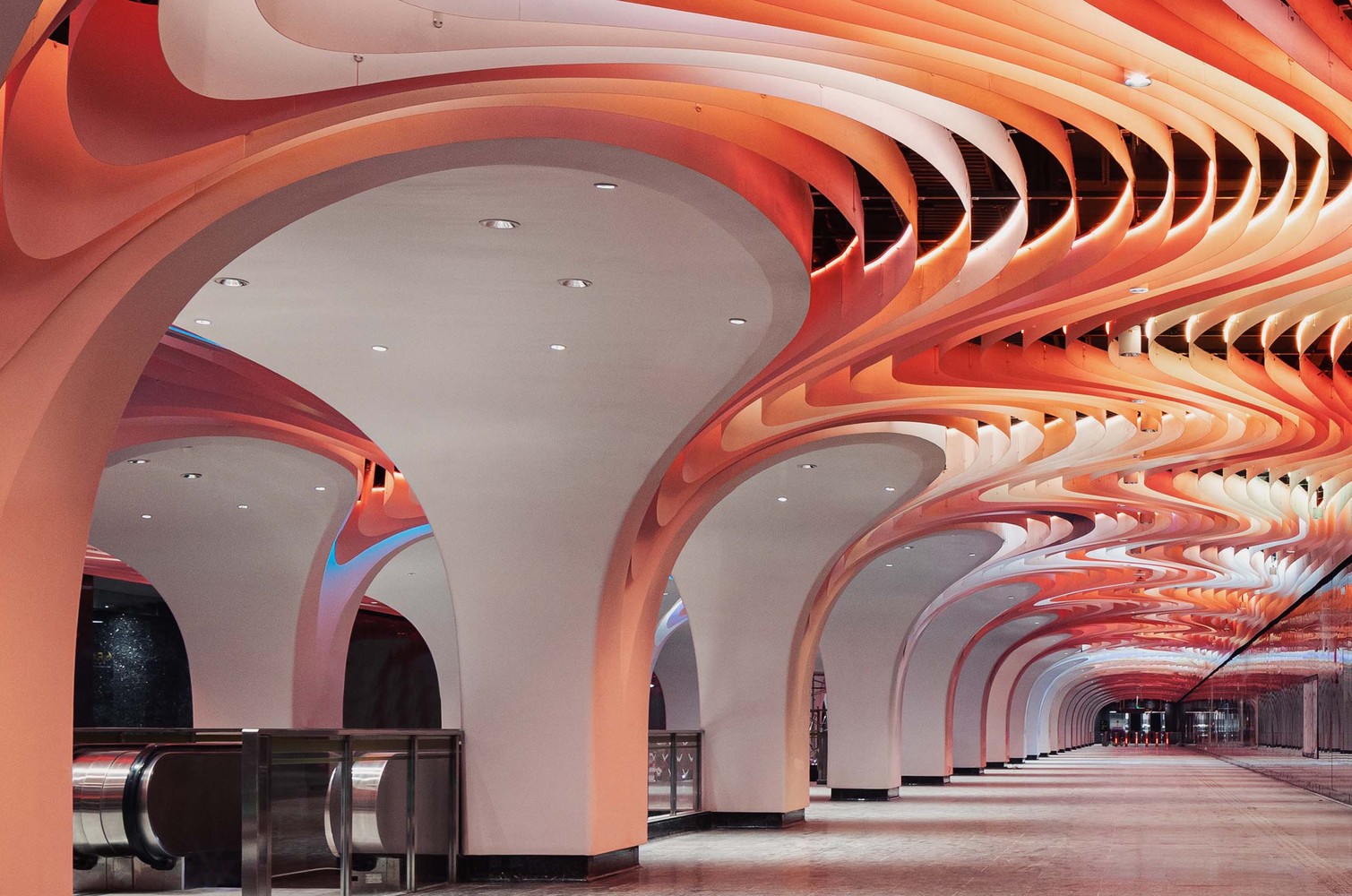 While architectural spaces can be given a soul by the sun's light, Yuyuan Station's underground space relies entirely on the flow of light from the ceiling. This LED canopy can be opened to the public for submission so that everyone can participate in shaping the spatial light and color of the Yuyuan Garden Station. We also hope that Yuyuan Station will become such a canvas, where the public will continuously participate and infill various, colorful souls into it. 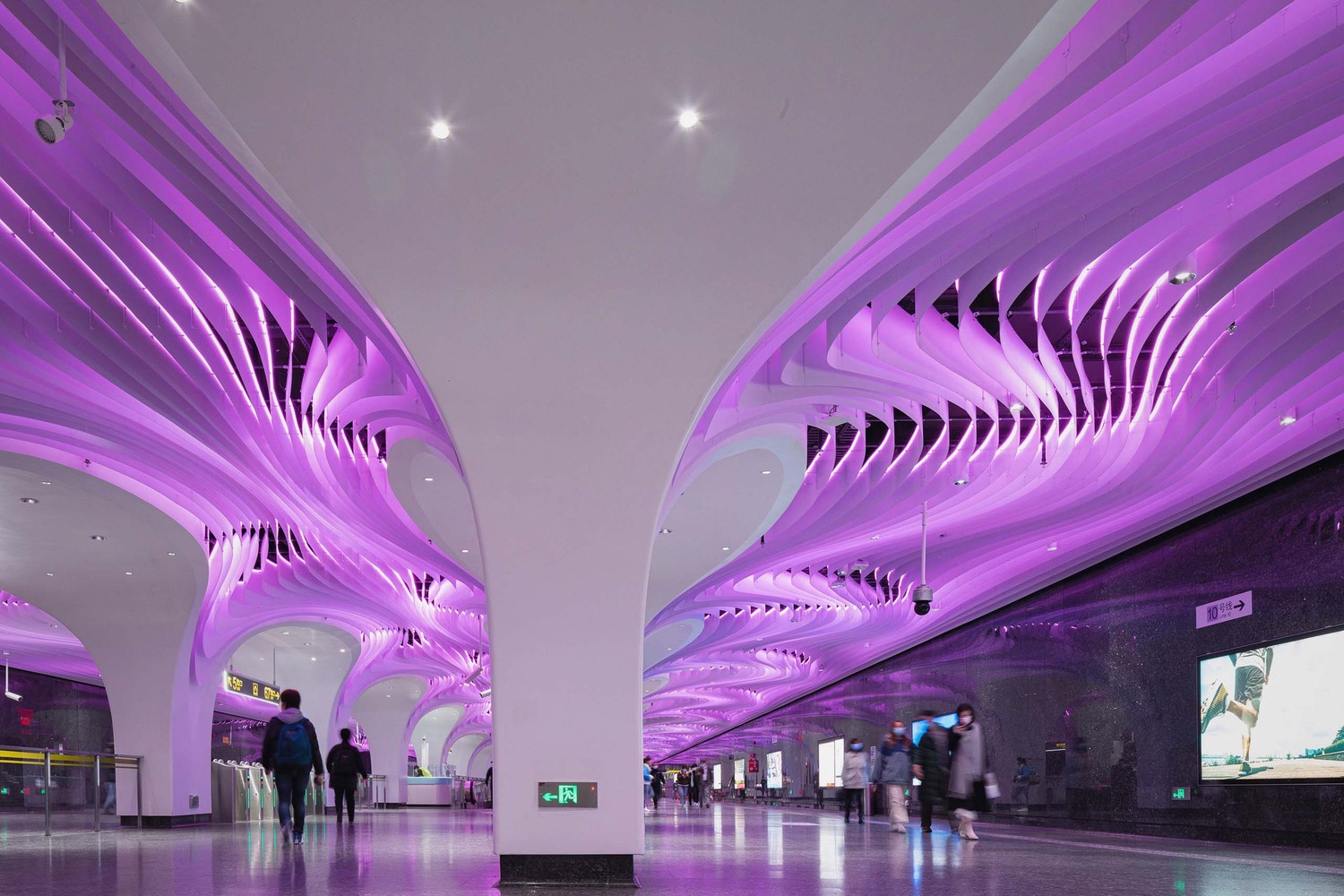