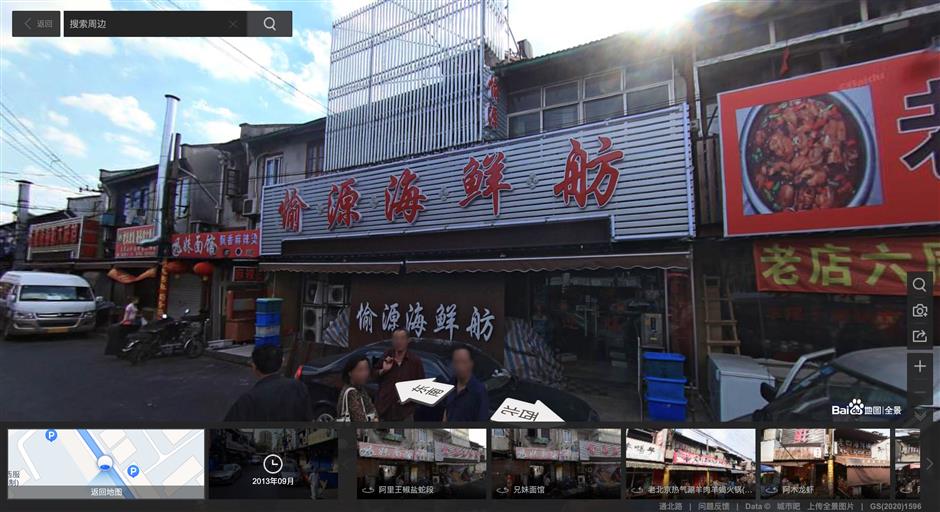 Being locked at home hasn't dented public enthusiasm for exploring the city.

Now, modern mapping technology makes it possible for people to "walk" in the city without breaching coronavirus restrictions and to share the experience with others.

Lavater Ye, who is in the customs declaration business for aviation manufacturing, organized a Map Walk recently on his WeChat Account 上海ShangHIGH. There he is better known by his screen name "50 Park."

Based in an online meeting room, his event attracted more than 60 participants 一 four times more than actual city walking tours that ShangHIGH has organized in the past.

The focus of the virtual walk was Tongbei Road, a small street in Yangpu District that was known for its street seafood stalls before construction of residential compounds and office buildings changed the area forever.

He added, "We also shared a documentary entitled 'Farewell, Tongbei Road.' made by Shanghai TV Station before the redevelopment started."

One of the participants in the virtual walk moved to a residential compound near Tongbei Road in 2008.

Back then, her apartment building was the only high point in the area, and she recorded changes in the road from above.

On the online tour, she and several others shared old pictures and stories of the road 一 recollections of a small restaurant, a variety shop and silhouettes of neighbors.

"As a Shanghai native, I always remember places that were full of what we call yanhuoqi, or the 'common life of common people,'" Ye said. "Some of them have disappeared with redevelopment in the city. The Map Walk event revived a lot of memories – not only about Tongbei Road but also many other areas."

Before the most recent pandemic resurgence, ShangHIGH organized regular offline events, such as city walks, sports activities and movie nights.

The last event was a documentary night in March that featured "Isaac Stern in China 1979." It aired the recorded Beijing performance given by renowned American violinist Isaac Stern (1920-2001) after the country opened up to the outside world.

Soon after the documentary night, Shanghai closed itself in a massive lockdown.

Ye said the resurgence of coronavirus has been both a blessing and a curse.

On the one hand, his love of camping out has been completely thwarted and might not be possible again for some time. On the other hand, Ye has found a close new bond with his neighbors in his old compound in Changning District. They have formed a group for online grocery purchases.

"The lockdown experience makes me realize how precious time is," he said. "When life returns to normal, I'll grab every chance I can to explore more about the city, the country and the world."

Meanwhile, a similar online event exploring the city was recently initiated by a volunteer group called Yilanzhongshanxiao. The event collected photos submitted by netizens and asked participants to guess the street corners, parks, Metro stations and residential blocks where the photos were taken.

"The event was so popular that it lasted more than half a day," said an organizer whose screen name is Yingluo.

Some of the participants were very astute observers. One guessed the site of an overpass in the city. Yingluo said he thought that photo would be the most difficult to guess because there are so many overpasses in the city. The participant pinpointed the right place based solely on the width of the road underneath it.

The event has brought together people from all walks of life who are interested in exploring the city. Some are already making plans for a real-life walk together after lockdown is lifted. High on their wish lists are places like the Shanghai Automobile City Metro Station and the city's earliest library in Xujiahui.

"Our event was like an acupuncture treatment, stimulating a desire to get out and explore Shanghai," Yingluo said. "We want to send the message that we all still love this city even as we have to endure a trying time."