Visitors enjoy the exhibition Meet Dunhuang in July last year at the Meet You Museum in Beijing. The museum was set up by a Beijing-based company to offer creative art experiences to audiences. [Photo provided to China Daily]

The design of creative products, inspired by Chinese culture, is evolving from simply copying to the exploration of traditional elements for customization.

The Shanghai Symphony Orchestra, the oldest orchestra in China, is an organization that is willing to give this a try. It formally introduced its cultural and creative products at the end of 2019, as part of celebrations for its 140th anniversary, along with a series of tours of different countries.

"At the time, we were proud to share our history and classical moments with the audience all over the world, also in terms of the cultural and creative products with our unique designs on them," says Lu Jing, branding director with Shanghai Symphony Orchestra.

One of the items Lu and her team took along on the world tour was a box of coffee in the shape of an old-style camera, which contains seven drip coffee bags printed with photos of significant moments in the history of the orchestra.

In 2020, the spread of COVID-19 caused the sudden closing of its concert hall, so the orchestra launched an online program that uploaded audios and videos, organized online concerts, and displayed cultural and creative products online.

Different from museums that showcased art pieces for visitors via exhibitions and then attracted them to buy cultural and creative products as souvenirs from gift shops, the orchestra designed its exclusive products as a new way to communicate with the audience.

"We try to rebuild our relationship with the audiences through the elaborate creative products by sharing the precious history of our orchestra in a vivid way, " says Lu.

In 2020, the orchestra received two vinyl records, which were believed to be the earliest known recordings of the Shanghai Symphony Orchestra from Xu Shen, a local resident. Xu found the two records in his father's collection and donated them as his father's last wish to the orchestra.

Inspired by the vinyl records recorded in 1929 by Odeon Records, a Germany record label, Lu's team transformed the century-long leap into a set of handmade ceramic plates in the shape of the record and launched an NFT (non-fungible token, a data blockchain) product as a new form of art collection.

"Like this plate marked the historical moment from 100 years ago, each item we've released has history, significance and culture in it, which might arouse interest among the audience to explore the exclusive history and meaning behind the unique designs," says Lu. 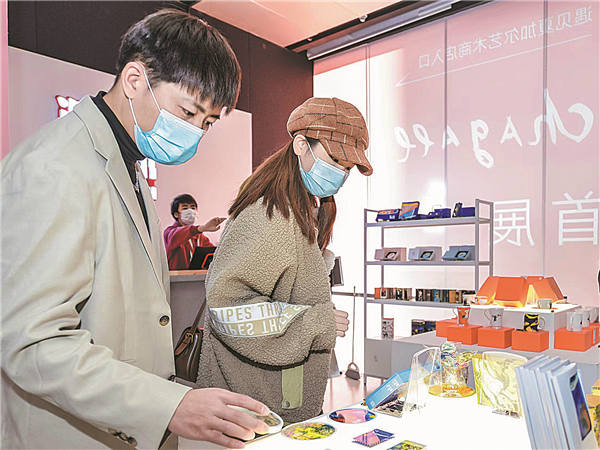 Visitors purchase cultural and creative products at the Meet You Museum in Beijing last July. [Photo provided to China Daily]

By the end of last year, the orchestra had developed more than 100 items of cultural and creative products, featuring products of practical use and with peculiar connections to music. For its 2020 New Year's concert, ovenware painted with the cartoon portraits of 10 conductors was designed to be a humorous summary of the past decade. Marking the 250th anniversary of Beethoven's birth, the orchestra released a series of creative products.

"We make sure that every piece available in our online shop is carefully conceived and delicately presented for the audience with creativity," says Lu.

At the same time, the government has promoted the transformation and development of culture, laying the foundation for creating a "unique cultural IP with Chinese characteristics". The culture industry has been booming from a surge in the number of related enterprises. According to statistics released by China Business Industry Research Institute, there were only 1,357 cultural innovation enterprises in China in 2015, which increased to 5,000 in 2019. By 2021, there were 10,000 cultural innovation enterprises in the country, with a year-on-year growth of 65.3 percent.

In order to allow young people to understand museum culture, cooperation with brands has become an effective way to break the ice in the industry.

"The creativity of culture should be shown not only on the packaging but also on the design of the products, to present meaningful stories that have faded in history, in a modern way, for consumers," says Qiu Tong, CEO of Beijing Zhongchuang Tourism and Culture Group, which became widely known after working with the Summer Palace on a series of cultural and creative products in 2019.

Every year since its launch in 2017, the company has set a goal of coming out with at least "100 creative ideas" to meet the demands of clients, especially in the culture industry. So far, it operates over 20 intellectual property licenses for branded product crossovers.

"We designed a collection of cultural products for the Summer Palace by collaborating with Be &Cheery, a snack brand. One small snack box named 'rich and honored in blooming flowers' was designed as a closet in the shape of the palace where Empress Dowager Cixi (1835-1908) lived," says Qiu.

Every piece in the collection, he says, embodies cultural elements or settings unique to the Summer Palace in order to give the items specific cultural meanings, which are unique. 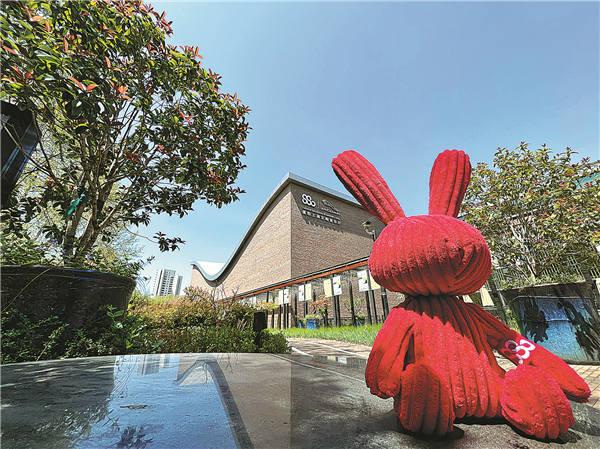 A giant Mozart rabbit presented by the Shanghai Symphony Orchestra last year to mark the 230th anniversary of the composer's death. [Photo provided to China Daily]

However, the primary goal for a company is to make profits. Therefore, Qiu has expanded the company, from 30 staff members to 200, and launched its offline cultural venue, Meet You Museum, to bring art and culture to daily life.

"We are keen to set up a new market-oriented business structure focusing on the design of cultural and creative products, as well as the introduction of the cultural exhibition space to offer both product and spiritual consumption to the consumers," says Qiu, who was inspired in his vision after visiting numerous museums and art galleries in various countries.

Qiu aims to open up to seven branches of Meet You Museum in the country by the end of 2022 to enable visitors to see international artworks, too.

"The support of cultural power may allow people to remember the experience for a lifetime and inspire their inner sense of beauty and kindness," says Qiu.

However, there are some problems in the cultural and creative industry. For example, the protection of IP rights is a top concern for Qiu's company.

"The cultural and creative market is not highly regulated with detailed laws or rules to protect the IP rights we own or purchase from overseas, so we are like fighters in the war who need to be defensive," says Qiu.

In addition, more museums and art galleries are rushing to the industry to fight for profits. According to the 2019 Museum Cultural and Creative Products Market Data Report jointly released by the Institute of Cultural Economics of Tsinghua University and Tmall, an online market of technology company Alibaba, 72 percent of the cultural and creative products were cross-border derivatives, which meant that the amount of cross-border derivatives was three times more than the proprietary products in the museums.

Ma says museums and art galleries should start with audiences, and think about what kind of cultural creation they should have.

"It sounds simple, but there is a lot of work behind it, like market research, data analysis, creativity and so on," says Ma, adding that it is easy to enter the cultural and creative industry but it is difficult to do it well, and it is even harder to do it well for a long time.