Building a city into a natural landscape without borders

Strolling along Shanghai's Suzhou Creek on a brisk morning last week, I saw from a distance a woman sitting in a colorful butterfly-shaped chair, a mobile phone in her hands.

The comfy chair was placed on a piece of grassland separated from the river by a promenade made of antiseptic wood. As I drew nearer, I found her absorbed in private thoughts, unruffled by the scampering feet of kids running around, even less by the footsteps of wayfarers along the boardwalk. A while later, she put down her phone, picked a pocketbook and read to herself. 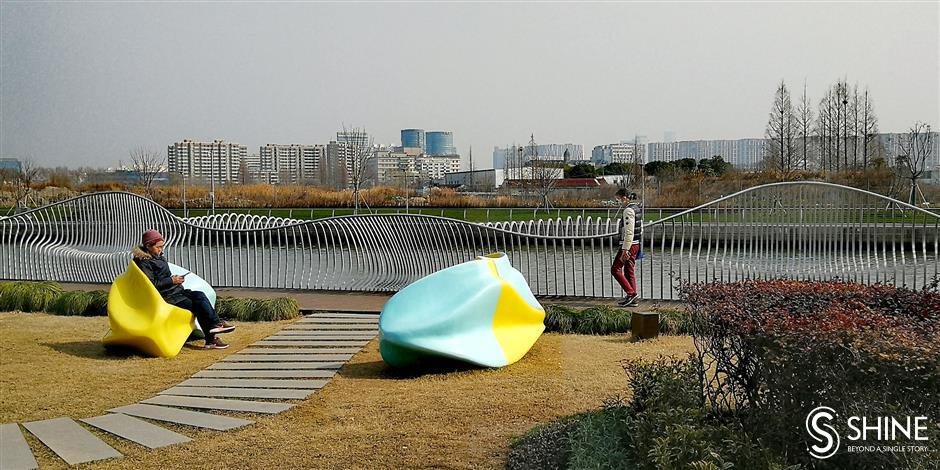 Above and below: A woman reads in a chair in the shape of a butterfly on a piece of newly created grassland by Suzhou Creek. The increased public space is a showcase of the city's effort to forge a "people's city." 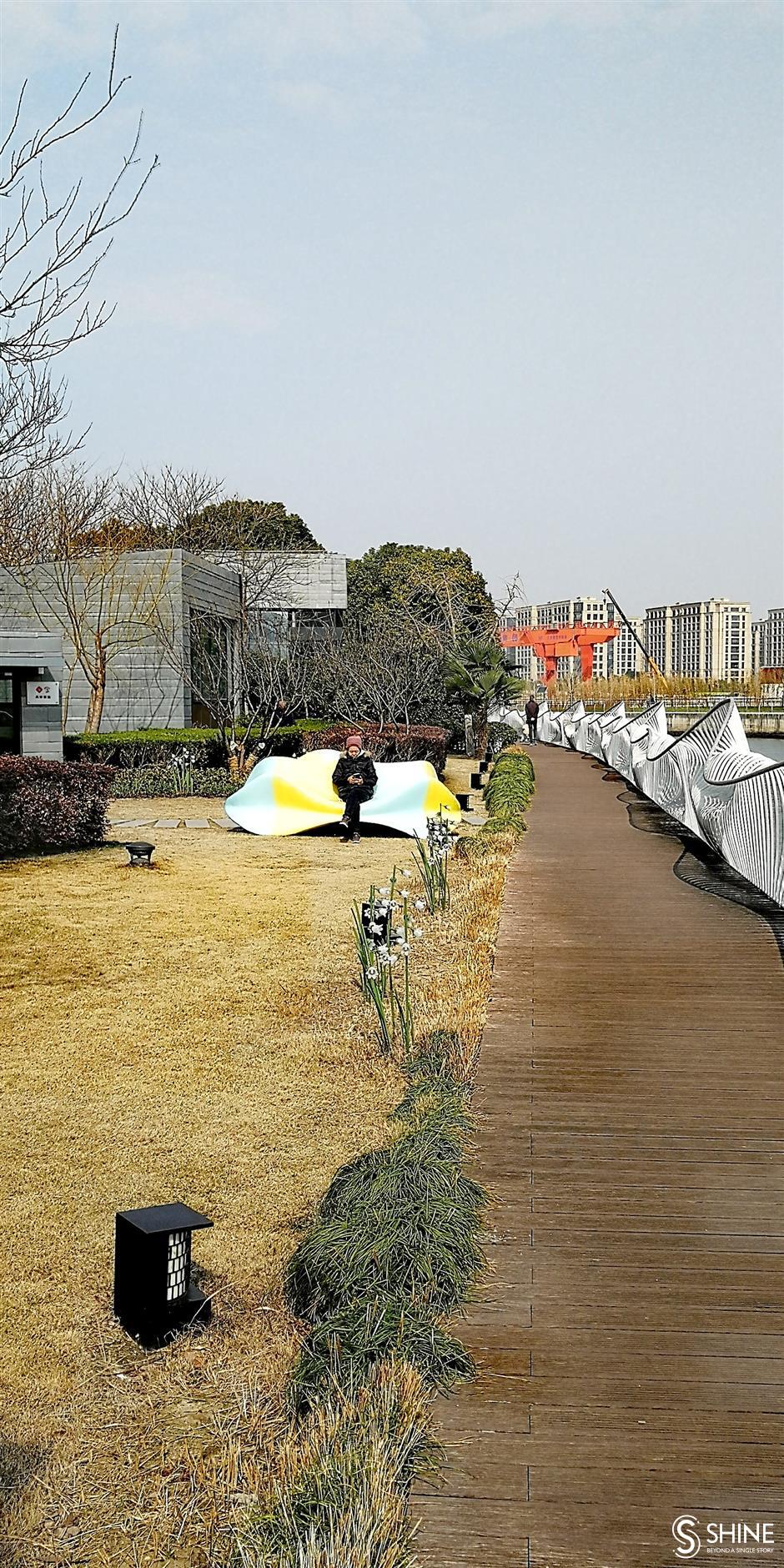 The peaceful scene evoked a feeling of home away from home. She was reading at ease as if in her own garden or parlor. With vicarious pleasure, I also sat down in a nearby chair.

As I leaned back and stared at the sky, it suddenly dawned on me that I was sitting near a downtown traffic artery featuring multiple motor lanes and elevated bridges. Through trees and shrubs, I could vaguely see cars and trucks moving in various directions, but, strangely, their rumbling noises were ignorable, though perhaps not inaudible.

Amazed, I stood up, walked around and found the "secret" to this unusual touch of serenity: The riverside grassland and boardwalk where pedestrians sit or stroll are tucked away from the main road, safely hedged against the frontal attack of motor vehicle noises.

This spacious riverfront space was not accessible to the public until about one year ago. I remember I once walked in the vicinity along a narrow pedestrian path bordering the main motorway. There was no escape, then, from the sights or sounds of motor vehicles moving at arm's length. However, by the end of 2020, Shanghai had cleared and connected most of Suzhou Creek's 42-kilometer waterfront routes for the convenience of pedestrians. And last year more public spaces were created or consolidated along the river. 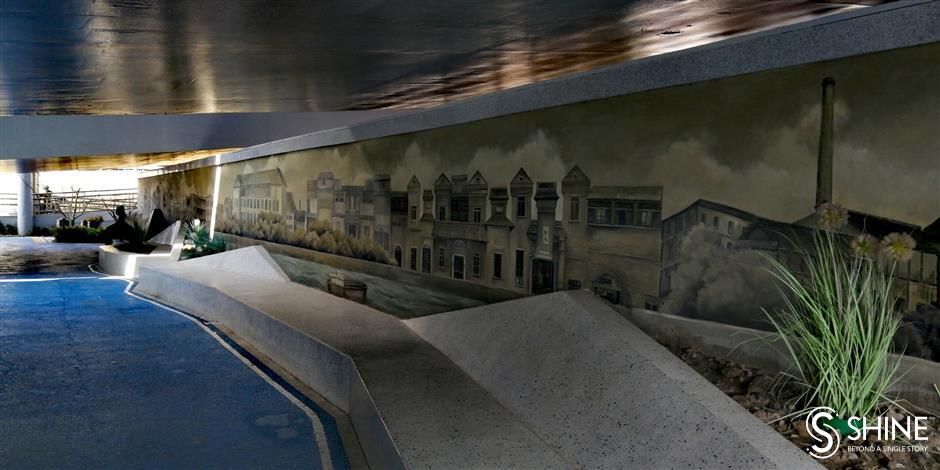 A newly spruced public space under a bridge over Suzhou Creek, where pedestrians can take a rest or do exercise.

Suzhou Creek is a lower reach of the 125-kilometer-long Wusong River that originates from Taihu Lake and flows east. The creek is so called because some foreigners who came to Shanghai in the 19th century discovered that it could, with navigable waterways, link Shanghai with Suzhou, a prosperous city on Taihu Lake.

As a cradle of modern industry in Shanghai, the creek area began to be polluted in the 1920s due to mushrooming manufacturing plants along the banks.

Now the creek has largely been restored to its former rustic beauty, thanks to decades of water-clearing efforts, especially those made in the 1980s to relocate riverside factories and those made over the past two years to create continuous riverfront walking spaces strewn with natural scenery, such as rolling meadows, thick bushes and wild plants.

As I moved back and forth on the new meadow by the creek to roughly measure its size, I found it was about six or seven times as wide as the original pedestrian path I had passed a year before.

In other words, the new green space, built on reclaimed wasteland along the river, has created a vast walkable community, giving pedestrians a rare retreat and relief from urban congestion. 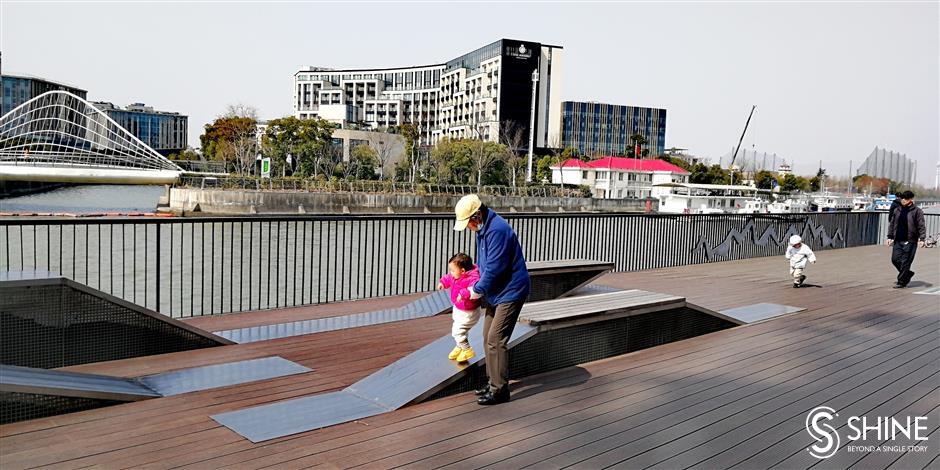 A walkable community along Suzhou Creek

On the margin of the meadow, two middle-aged people seemed to be "dancing" together. I walked closer and found the man, thin but fit, was teaching the woman to practice tai chi in an open space right under an elevated bridge above the city's bustling Middle Ring Road.

There were plenty of wooden benches, so I sat down and watched them with amusement. An elderly man was also watching on the sidelines, sometimes chipping in with questions about how best to concentrate on one's inner energy when moving one's arms and legs.

Behind me was a small house with glass walls, where people could borrow umbrellas, get fresh water, or charge their mobile phone for free. The house was built half under the elevated bridge and half on the open meadow.

Again, nearby traffic noises were tolerable, as the public space was also insulated from the main road by trees and shrubs. Indeed, I was absorbed in the tai chi movements of the two practitioners, so much so that I was oblivious to vehicle noises beyond the bushes during my 20-minute stay.

This cozy open court where I stayed for a short period has a poetic name ― the fengling (wind bell) rest station. It's one of the many public spaces newly created on reclaimed wasteland under elevated bridges in Changning District and encompassing the western part of Suzhou Creek that flows through downtown Shanghai.

According to a March 3 report from Shanghai Municipal Bureau of Planning and Natural Resources, these new public spaces have just been selected as a national model for efficient reuse of irregular pieces of land under elevated bridges.

These reclaimed sites are mainly used as riverside rest stations or sports venues, forming successive open spaces that promote public health and security no less than city parks do. To put this into perspective, Jing'an Park on Nanjing Road W., which provides city dwellers a much-needed respite from urban hustle and bustle, also has an area of about 30,000 square meters.

In the words of William Penn (1644-1718), founder of Philadelphia, a city "will always be wholesome" if buildings are surrounded by open space. Changning District's creative use of otherwise wasted sites attests to Penn's theory as well to New Urbanism's idea about pedestrianized urban centers.

New Urbanism is a worldwide movement that promotes walkable and diverse neighborhoods to combat urban sprawl typical of development in many places after World War II.

Omar Degan, a renowned Somali architect born and educated in Italy, approaches the value of urban public spaces from a different angle:

"A well-designed public space increases the sense of belonging and equality of citizens ... considering physical spaces as means of cohesion and reconciliation is fundamental because it is there that people live their life every day, meeting and interacting with each other..."

Roaming along Suzhou Creek amid fresh morning air over the weekend, I remember a newly announced city plan to add or upgrade at least 5,000 public seats across Shanghai this year, some of which will end up in the creek area. 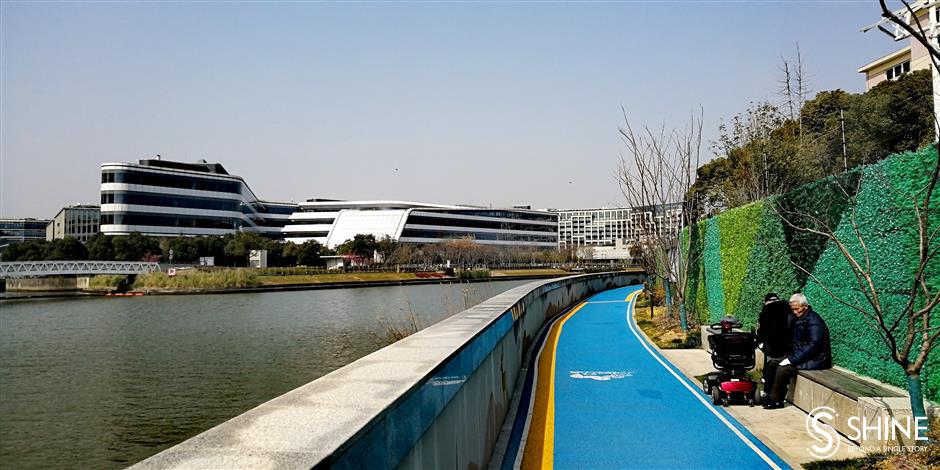 Above and below: Various kinds of public seating along Suzhou Creek 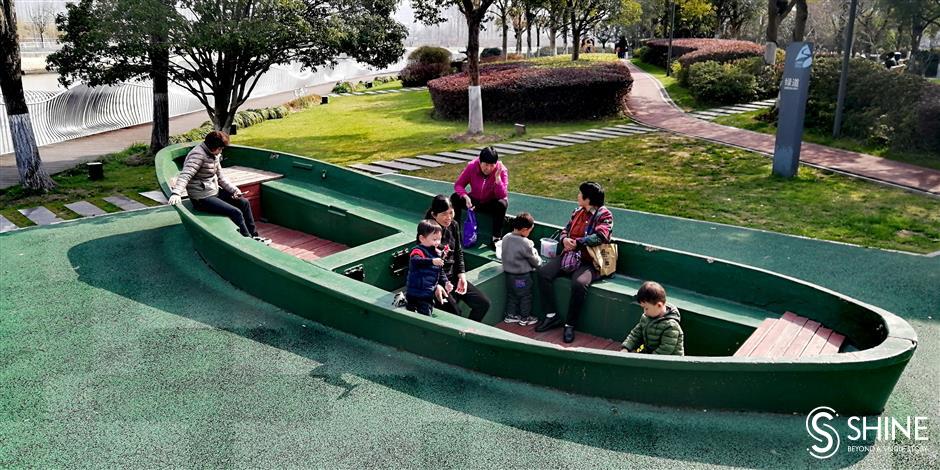 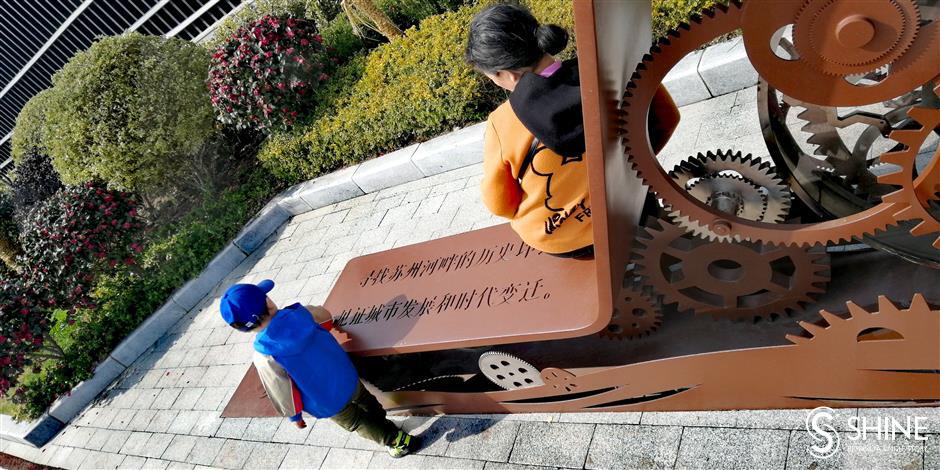 But, having walked nearly 10 kilometers along the winding river banks, I knew the riverfront esplanades have more to offer than mere public spaces where pedestrians can sit, walk and talk. The longer I walked, the more clearly it occurred to me that the meandering creek flanked by natural scenery fundamentally lends itself to a sponge landscape that boosts urban biodiversity, which in turn mitigates carbon emissions.

The ever-expanding green spaces along Suzhou Creek reminded me of landscape architecture that arose in the West in the 19th century to beautify urban spaces but, in the final analysis, Shanghai has transcended the Western thought and practice.

Yes, Olmsted's winning proposal for New York's Central Park includes such natural elements as meadows and lawns, but the entire Suzhou Creek area is becoming a "park" without borders or boundaries.

The tentacles of its natural scenery ― meadows and shrubs, for instance ― have spread into many riverside communities, be they office compounds or residential neighborhoods. In some areas, riverfront boardwalks and green spaces have virtually become the "backyard" for people who work or live nearby. 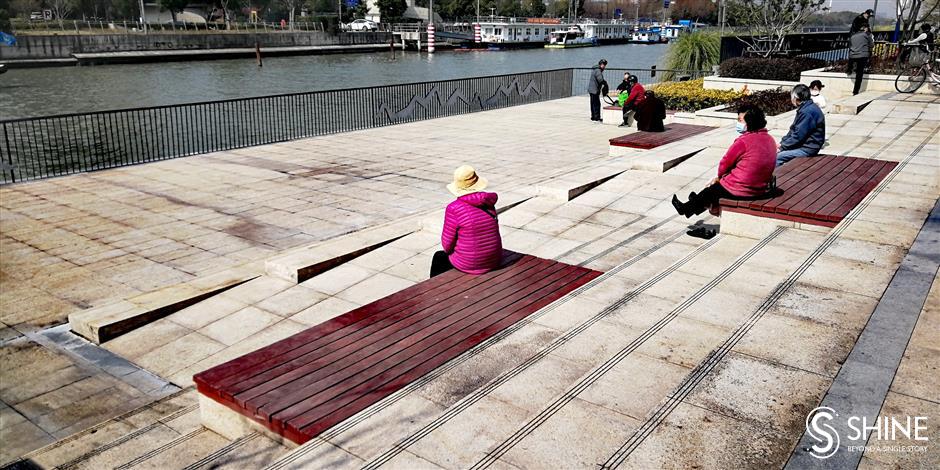 Local residents, as well as travelers, rest on wooden benches by Suzhou Creek, evoking a feeling of home away from home. 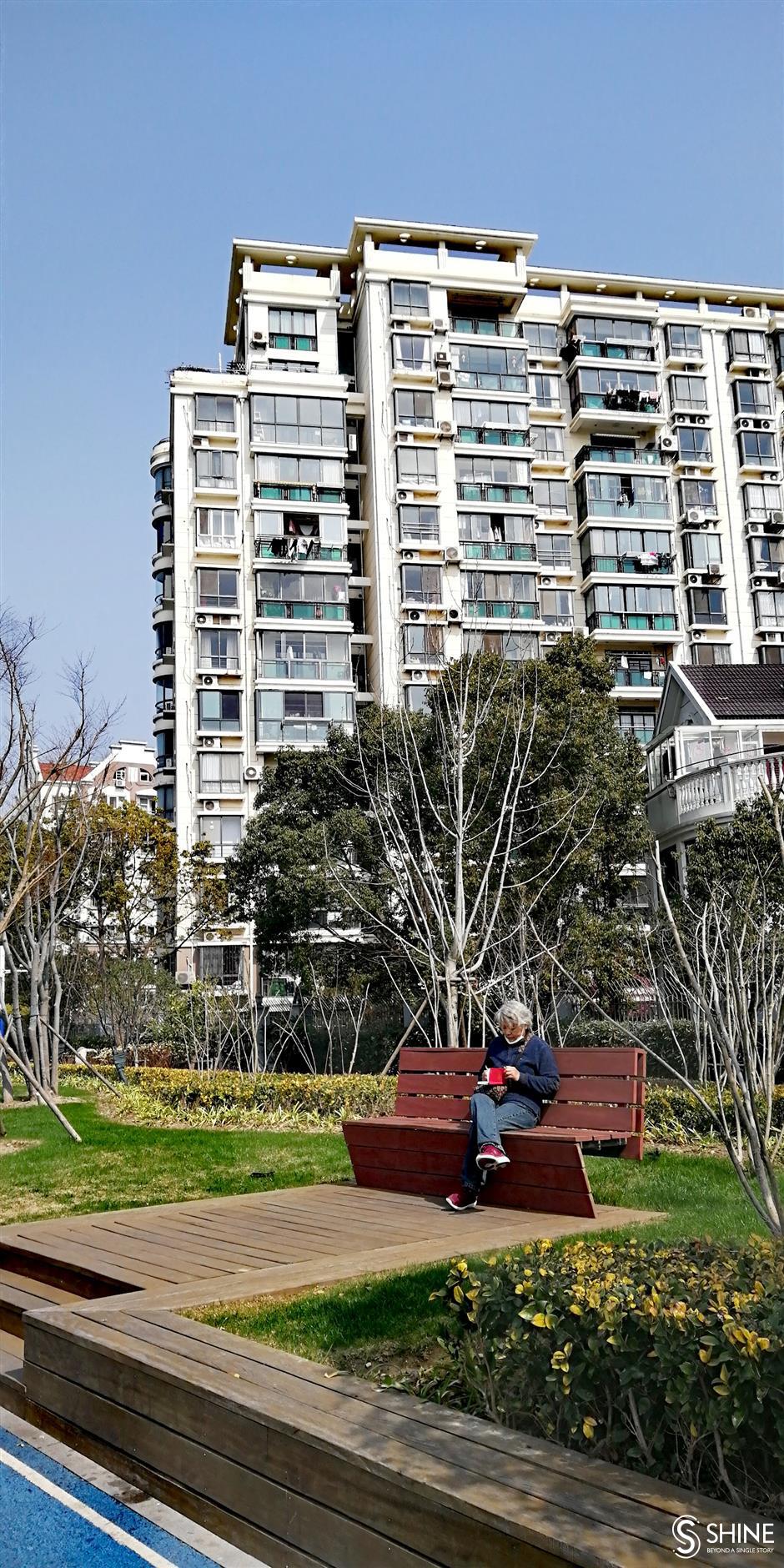 An elderly woman who lives in a nearby neighborhood reads a book in a riverfront chair, as if this is her "backyard."

And this "park" without borders is further expanding from land surfaces to fluvial territories.

Shanghai announced two weeks ago that it will build a number of scenic wharfs to facilitate cruising services on Suzhou Creek this year. One such wharf will be built around the fengling rest station where I saw people practicing tai chi.

Imagine one day you can take a boat home after work. 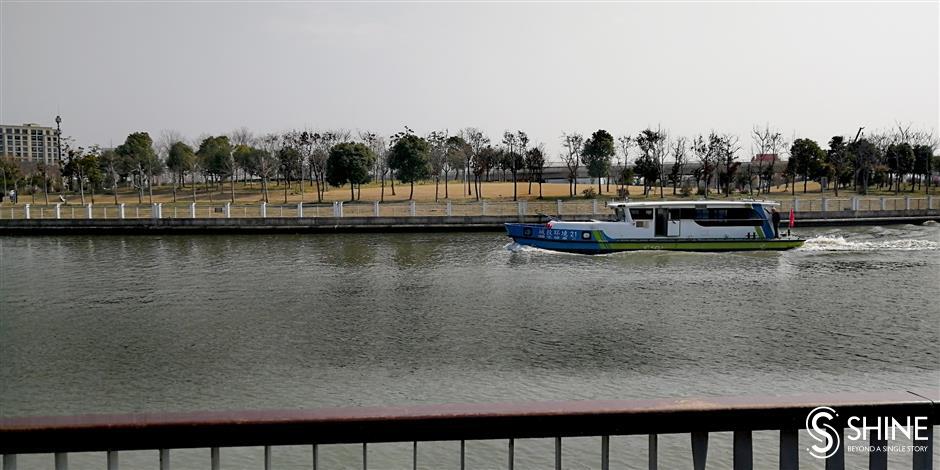 A patrol boat passes a riverfront meadow, near which a scenic wharf will be built. Cruising on Suzhou Creek will be a dream come true this year.

And you can go further than your home or office on the river. If we bear in mind the creek's natural connection with its upper reaches, which are still collectively called Wusong River today, we know that one day we'll be able to sail further southwest beyond the downtown contour.

Indeed, a giant riverside ecological corridor featuring forests, rice fields and pedestrian paths is being built along Wusong River. The easternmost point of the corridor, which I visited several times last year, is not very far away from some of the wharfs to be built this year along Suzhou Creek.

And if we go further southwest along Wusong River and some of its tributaries, we'll soon find ourselves at the site of Huawei's new R&D base under construction. It encompasses about 8 square kilometers of pristine lake areas at the heart of a future world-class waterfront city bordering Shanghai and its two neighbors ― Jiangsu and Zhejiang provinces.

Shanghai has decided to invest 430 million yuan (US$68 million) to build lakeside boulevards near Huawei base this year, and initial work began this month. When I went there for field observation last week, I was astonished to see a seamless merging of vast rural landscape with Huawei's lakefront spaces. 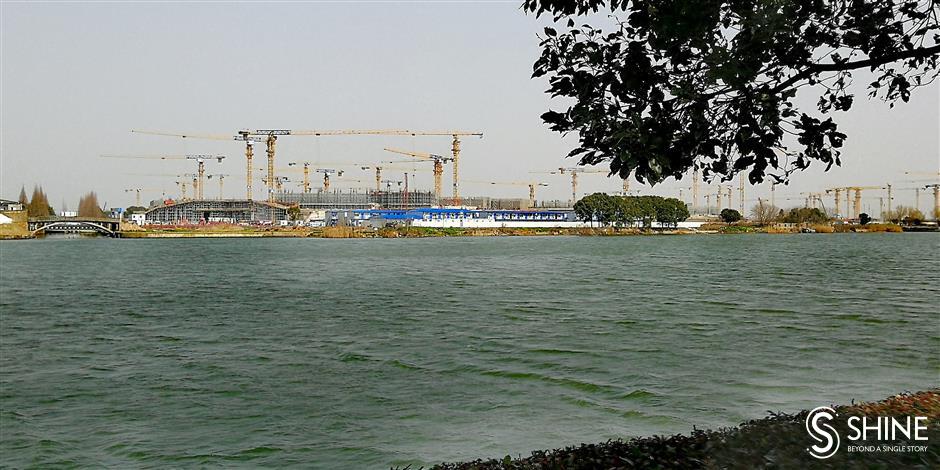 A view from a bucolic village of Huawei's R&D base under construction. A boulevard featuring rural and natural landscapes is being built on either side of the big river, which lies to the south of Wusong River. 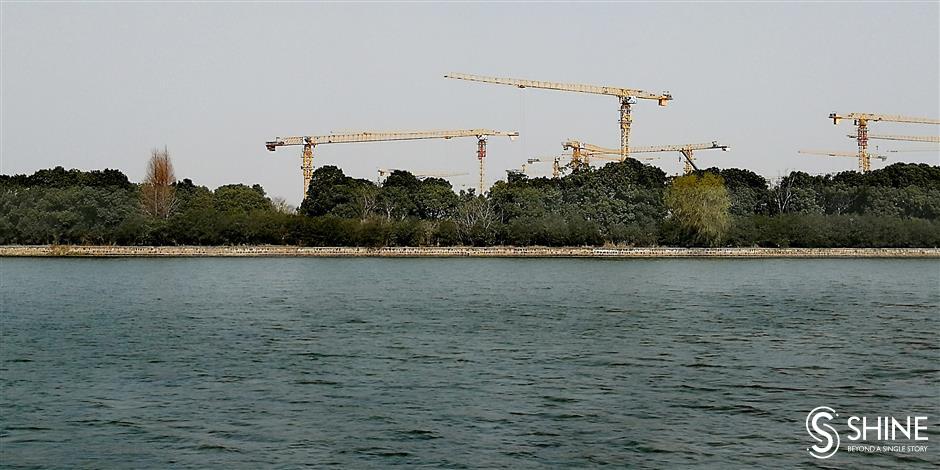 A riverfront forest already existing at Huawei's R&D base will become part of a future boulevard.

"The boulevard project will take a few years to complete," said a middle-aged farmer who was shouldering a huge bag of fallen leaves collected from a rural field separated from the new Huawei site by a big river. "It's a gorgeous project, you bet."

As he talked to me, a group of women farmers smiled at us. They said they were also clearing the field of wild grass to pave the way for a future expansion of riverside green spaces. Certainly the vast farmland will be retained, they said.

We may not be able to sail from Suzhou Creek to Huawei's rustic complex yet, though all the waterways are linked. But when that day comes, hopefully in the not-so-distant future, we will see and feel for ourselves how Shanghai will have become part of nature ― not just bringing nature back to some parts of it ― thanks to an ultimate revival of its river culture that will transcend the urban-rural dichotomy.

"France, Germany, the Netherlands and Scandinavia have all played an important role in the development of landscape architecture, but the place where it seems to be growing fastest is currently China," says British architect Thompson.

And one mode of thought and practice Shanghai can offer is to build a city into a natural landscape without borders. It's a city of the people, a city that breathes like a sponge.