Shanghai's 'Hanging Gardens of Babylon' to open along creek 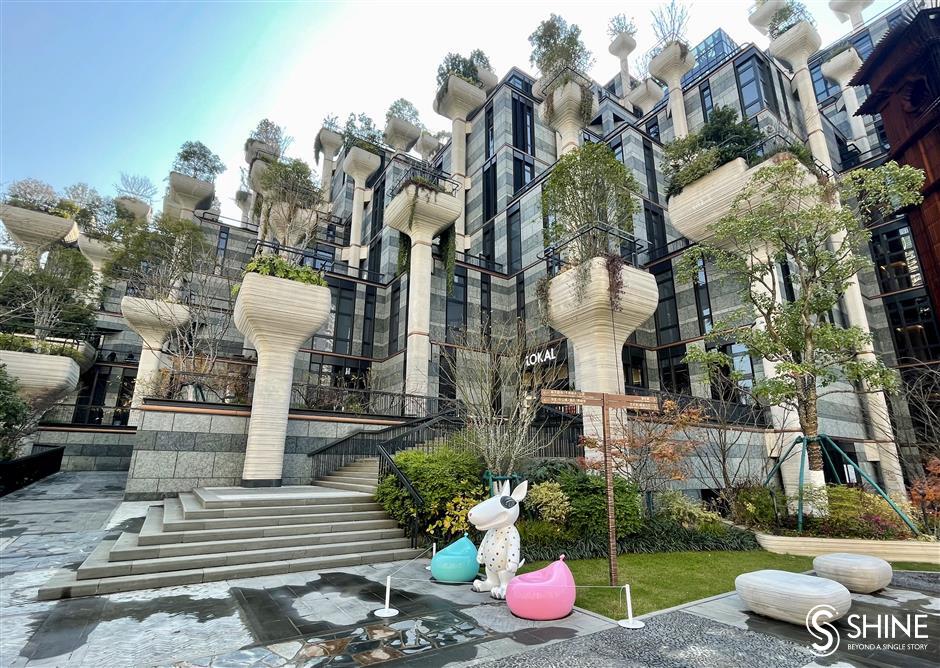 The new landmark commercial project "Tian An 1000 Trees" will open along the Suzhou Creek on Wednesday.

A new landmark shopping complex along the Suzhou Creek in Shanghai, dubbed the city's Hanging Gardens of Babylon, will open on Wednesday.

The initial phase of the "Tian An 1000 Trees" project will include restaurants, museums, art galleries and entertainment sites, along with the city's earliest industrial heritages.

Residents and tourists have been intrigued by the structure's unconventional appearance during its eight years of development, with trees planted on its pillars and balconies.

There will be up to 1,000 pillars with a tree on top of each, giving the structure a hill-like appearance. An automated watering system has been buried in each of the pillars to keep the 70-plus species of trees luxuriant throughout the year.

The structure – designed by Thomas Heatherwick, the British architect behind the United Kingdom Pavilion at the Shanghai World Expo in 2010 – is along Moganshan and Changhua roads in Putuo District to the east of the Changhua Road Bridge.

"It will become the most shining 'pearl' along the 42-kilometer-long Suzhou Creek riverside in Shanghai's downtown," said Song Shengli, deputy director of Putuo's publicity department.

Construction has begun for the second phase which will be a taller structure with hanging gardens along the creek. It will open as a boutique hotel and office building in two years' time.

The riverside region was the former site of China's earliest private flour factory – east Asia's largest and most modern plant of its kind when it opened in 1900. 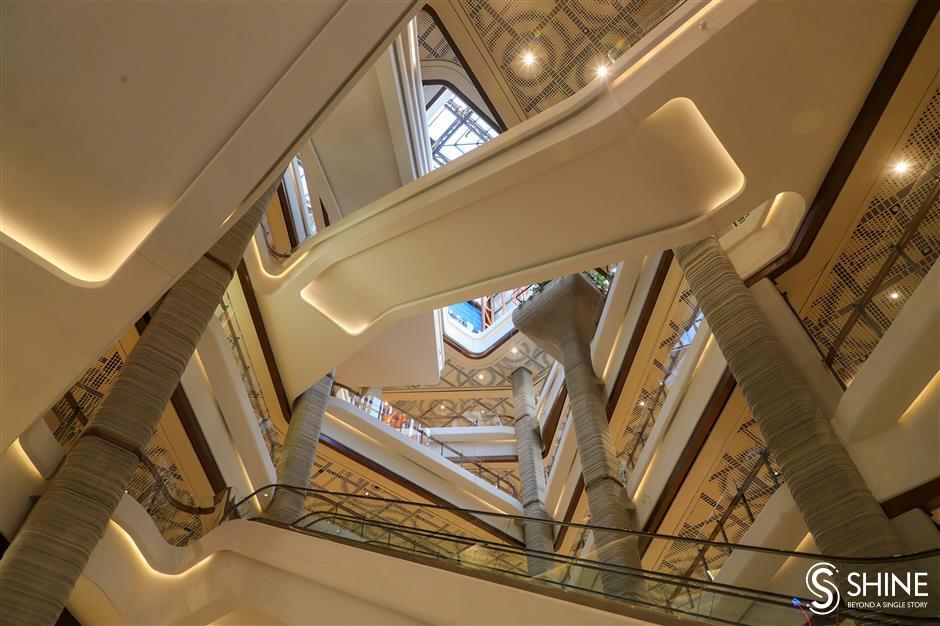 Each concrete pillar has a tree on its top and a smart watering system.

The Fufeng Flour Factory, which became the Shanghai Flour Factory in the 1960s, was owned by the Rong brothers, Zongjing and Desheng – tycoons known as China's "kings of flour and textiles."

Rong Desheng's son Rong Yiren was vice president of China from 1993 to 1998. He set up the China International Trust and Investment Corp, or CITIC, in 1978.

To highlight the history of the site, four buildings belonging to the former flour plant have been preserved and will be incorporated in the new complex.

A former bell tower of the factory has been converted into a sightseeing elevator. The tower is wrapped in rusty boards to highlight its history. Other historical buildings will house an art gallery and restaurants.

"The aim was (to come up with) a warm and live structure with harmonious relationship between human and nature, rather than a concrete mammoth," said Huang Jingsheng, marketing general manager of the project.

The more than 1,000 trees used for the project are said to be able to absorb 21 tons of carbon dioxide every year, while creating oxygen for over 2,000 people. 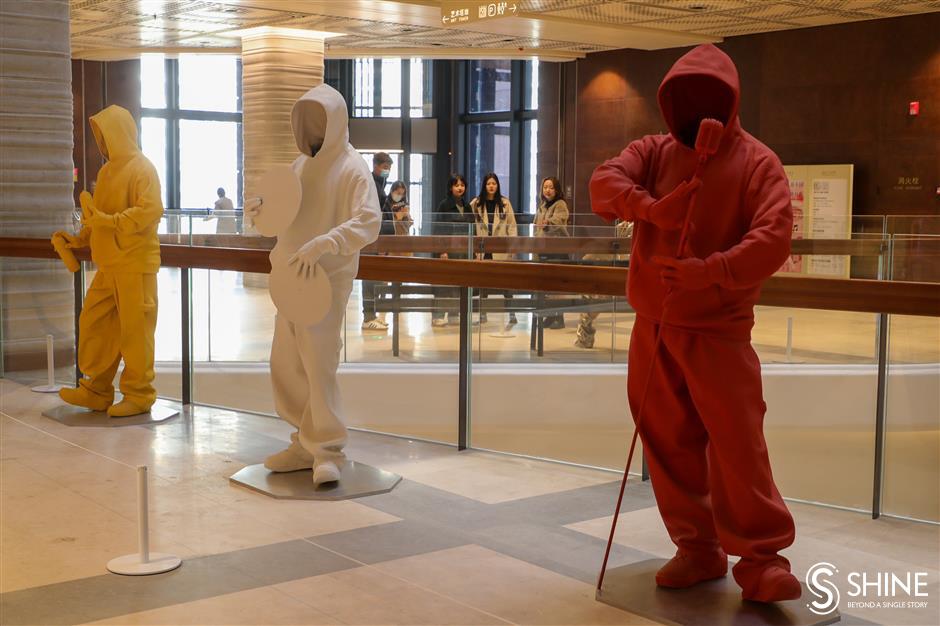 Global artists have been invited to create artworks for the shopping complex.

The inspiration for the design came from China's Yellow Mountain with the two phases of the project resembling two peaks, while the trees and plants make it look like mountain cliffs. "I wanted to create a structure where designers and businessmen can be inspired about possibilities," said Heatherwick.

The project is beside the M50 art hub, home to about 130 galleries and organizations from 18 countries. The hub opened in 2001 and features fine art, fashion design, architecture, furniture, film and animation, jewelry and art education.

Sixteen top graffiti artists were invited to create paintings on one side of the Tian An project to commemorate the once popular site among artists.

A 600-meter-long graffiti wall, which featured hundreds of examples of graffiti, has been torn down to open up the riverside space for the commercial project.

Artists have also been invited to exhibit their artworks or create paintings and art installations inside the mall. A number of art galleries will open in the complex to work in concert with the neighboring art hub.

A riverside path flanked by cherry trees has been created in front of the complex along the creek and an art installation will be unveiled early next year, to become the first artwork placed on the creek, according to the Changshou Road Subdistrict.

A lighting ceremony is scheduled on Wednesday night for its grand opening when all the hanging trees will be illuminated along the creek. 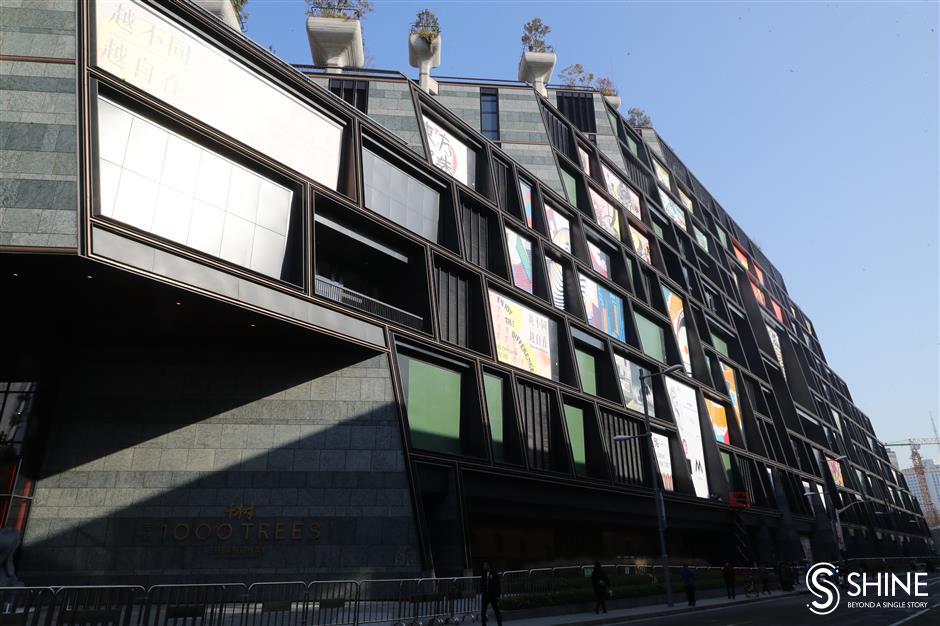 Multiple graffiti paintings on a side of the project near the M50 art hub. 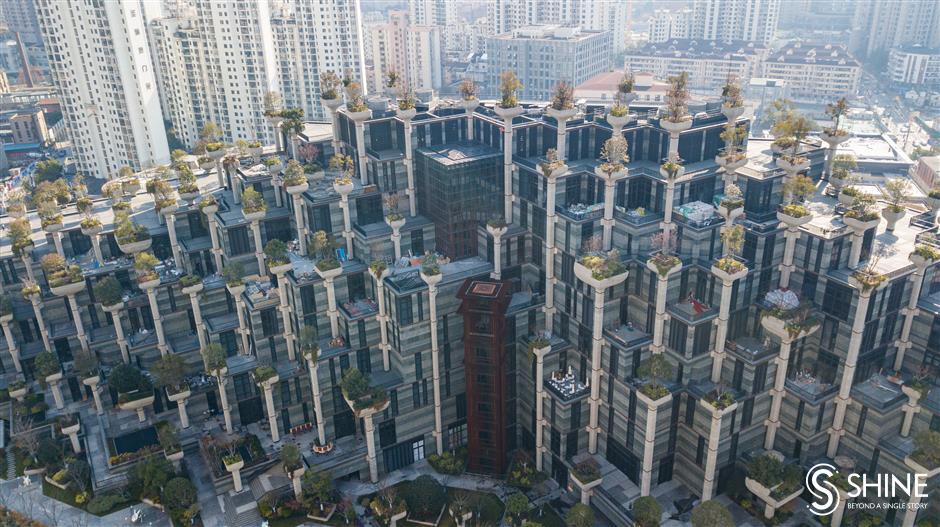 The project has been dubbed Shanghai's Hanging Gardens of Babylon. 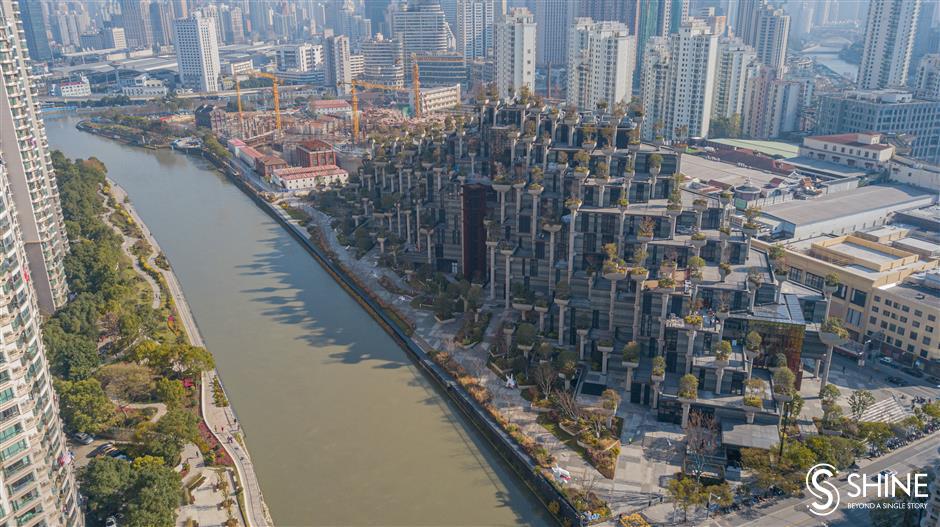 Work on the second phase of the project has begun along the Suzhou Creek.