It is hard enough to revive lost ancient artistry, much less revitalize it in the modern world, but that hasn't stopped book artist Zhang Xiaodong.

His exhibition "Leaves of Infinity," which will open tomorrow at the Art+ Shanghai Gallery, will display how the decorative skill of 1,500-year-old dragon-scale binding is being deployed in modern art.

Dating back to Tang Dynasty (AD 618-907), dragon-scale binding is based on a scroll, where pages are pasted with precise, equal spacing from each other. The illustrations in a book are cut into strips and each strip is pasted on the margin of each page. The result: When the scroll is spread out, the margins of the pages compose complete illustrations. 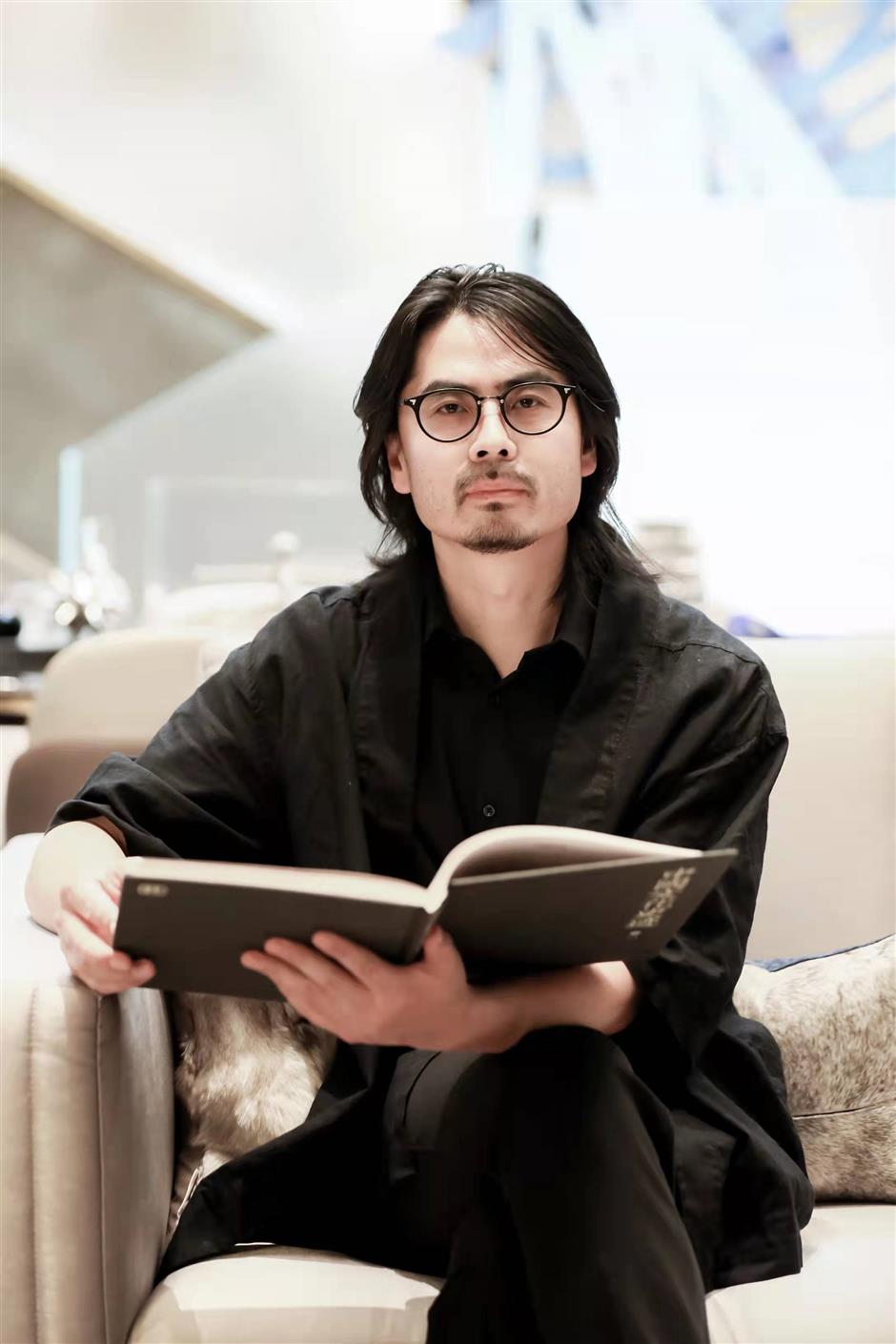 The arrangement resembles the scales of some animals, hence the name "dragon scale."

The artistry was lost around the 17th century, after being passed down for generations by royals and scholars. Only one ancient example is left today, and it's housed in the Palace Museum in Beijing. This treasure records the pronunciation of Chinese characters in the Tang era.

Zhang, based in Beijing, came across dragon-scale binding in 2008, when e-books and mobile devices were beginning to dominate the publishing business. He was not afraid to go against the trend.

"I believe that one very basic human need is to satisfy the senses, such as sight and touch," he said. "I believe traditional books made of paper provide gratification for many people, including me. Dragon-scale binding is very old yet it has a sense of 'future' about it because of its dynamic flexibility."

The first book Zhang crafted will be displayed at the exhibition. It is a copy of the Buddhist scripture "Diamond Sutra," first printed during the Ming Dynasty (1368-1644) and written in 32 different fonts of Chinese characters.

With illustrations added to the book, Zhang's copy is indeed a feast for the eyes, with its delicate rice paper, dynamic illustrations and ink fragrance.

"When you flip through the book, one illustration disappears as soon as another appears," Zhang said. "That might give you the feeling of Zen." 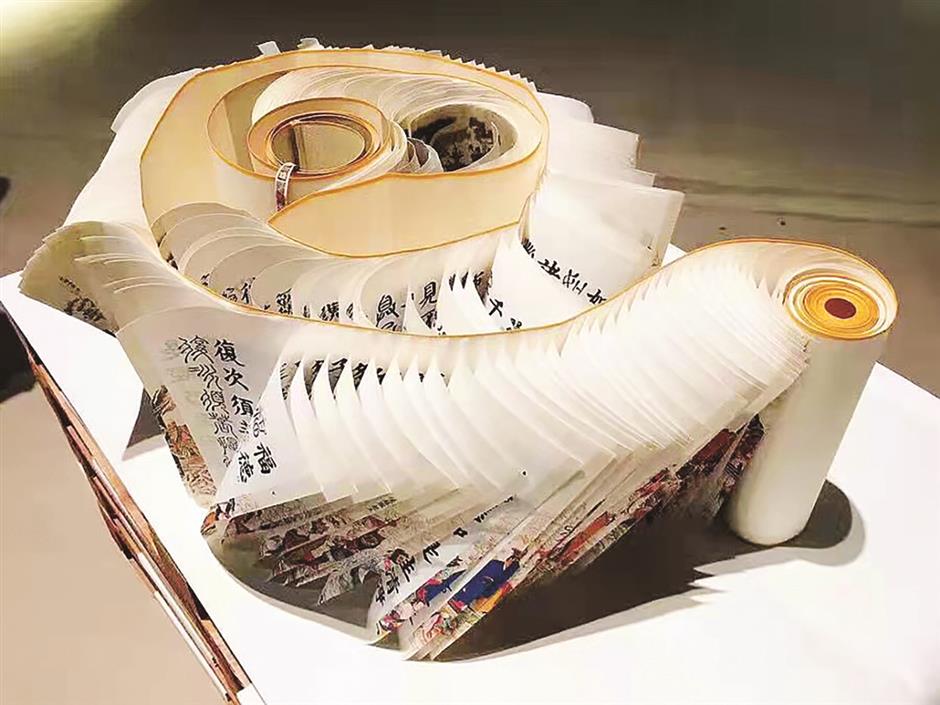 He doesn't stop with making books. Zhang also uses the techniques of dragon-scale binding to create or remake paintings, some of which are displayed in the exhibition.

The paintings are composed by an array of carefully cut colored pieces of paper, producing an effect somewhat like Venetian blinds. In a breeze, the paintings move like three-dimensional animations.

He calls the art style qianye, which literally means "a thousand pages."

"I stayed in Dunhuang for a long time in 2020 and talked to many experts studying the frescos," Zhang said. "It inspired me to finish the works."

He calls the small pieces of paper that compose the paintings "leaves."

"It's not easy to do because I often had to stop and ponder the shape of the 'leaves' so that they would perfectly portray the characters in the painting."

He said it was inspired by fascinating sunset scenery when he visited Mingsha Mountain, or the Singing Sand Dunes, near Dunhuang.

"I wanted to display the special texture there so that people would know Dunhuang has not only frescos but also stunning natural views," he said. "So I used a dye made from chestnut shells that had been soaked in water for more than two years to paint the 'leaves,' and then I cut them into a landscape painting."

In a work inspired by Mingsha Mountain in Dunhuang, the colors of "Non Sand" come from soaked chestnut shells.

Zhang says the creation of qianye was inspired by an exhibition in Tibet.

"At that time, maybe because of the weather, the pages in my dragon-scale binding books all rolled up, and the illustrations were hidden between them," he said. "Viewers could see only vague colors behind the pages, and they had to flip through the pages with their hands. They later told me that the illustrations fleeting between their fingers gave them a whole new reading experience."

In his Beijing workshop watching friends flipping through the pages with illustrations disappearing and reappearing between their fingers, Zhang said he was struck by the idea of cutting the illustrations off and making them into stand-alone paintings.

"I scissored off some rolled-up margins of the pages, one after another, and gradually a very three-dimensional painting started to spread out in front of me," he said. "I was in awe."

This was how qianye started.

Still, the most challenging works in Zhang's artistic career are books, not qianye paintings.

One of his masterworks is a copy of the Chinese classic novel "A Dream of Red Mansions," which took four-and-a-half years to complete. Unfortunately, it is not part of the current exhibition.

The book, based on movable-type printing, has 120 chapters with 230 illustrations. The pages are not pasted on a scroll, but rather on thin cardboard that can be folded like the bellows of an accordion.

The book's eight volumes stretch more than 60 meters when fully extended. More than 20 different types of paper, cloth and wooden pieces were used in their production.

"Had I known that it would take four-and-a-half years, I might not have started it in the first place," he said. "In our fast-paced modern world, that period of time is enough to start a company and float it on the stock market, and I used it to make one book." 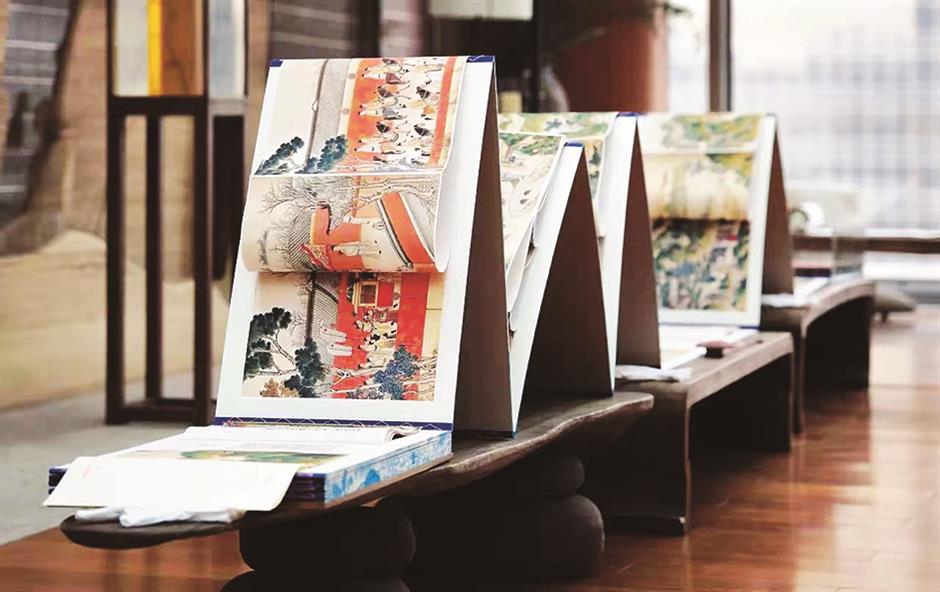 A copy of the classic novel "A Dream of Red Mansions," which took Zhang four-and-a-half years to complete, is one of his masterworks.

Zhang's artistic works mostly provide a bread-and-butter existence, but he has no plans to abandon his passion.

There are still a lot of ancient books to remake, he said, citing examples such as "Tao Te Ching" and "Classic of Poetry," or "Shi Jing."

Zhang also said he plans to create more qianye paintings, especially those based on ancient paintings of the Song Dynasty (AD 960-1279).

He said his mentor, book designer and Tsinghua University professor Lu Jingren, once told him that "making books will not bring one fortune but will satisfy all one's need for artistic creation."

"He was right," Zhang said.