It is a difficult task to select a group of representative artists from a particular century for one exhibition.

Titled "Among All Essence," the 2021 China-Europe art invitation exhibition currently running at Shanghai Jiushi Art Museum obviously takes on that task with a fine spread of 72 artworks created by 38 artists.

The exhibition "reviews the mainstream art styles in modern Chinese art history over the past 100 years, starting from Lin Fengmian (1900-1991)," said Chen Hailan, the curator.

"The exhibits also examine three important subjects in contemporary art – 'life and death,' 'time and space,' and 'stars and seas, plants and creatures' – via a cluster of contemporary artworks by Chinese contemporary artists, such as Fang Lijun, Sui Jianguo and Zhang Qikai."

Stepping into the exhibition hall, visitors immediately encounter prints and paintings created by the two artists – Kathe Kollwitz (1867-1945) and Lin – both had seminal influences on Chinese modern art that came later.

According to Chen, Chinese writer Lu Xun (1881-1936) was the first to introduce Kollwitz's woodcut prints to China in the 1930s. He published one of Kollwitz's woodcuts called "The Sacrifice" in a literary journal which promoted Communist beliefs.

Featuring realistic ideas, Kollwitz's art was well liked in China, and had a profound impact on emerging artists who witnessed the transition from wartime to peacetime.

Lin noticed Westerners' appreciation of ancient oriental civilizations in France in 1919, upon the outburst of the modern art movement in Europe.

In 1925, Lin returned to China and dedicated himself to educating local people and developing Chinese art by fusing it with Western culture. He wanted to be a "Chinese Cezanne" and founded the National Academy of Art in Hangzhou in 1928 and became its first principal.

Because of his time in Europe, Lin is renowned for combining Impressionism, Expressionism and Fauvism with traditional Chinese aesthetic taste, which is exemplified in his paintings "Landscape" and "Ancient Lady," both showcased at the exhibition.

"Lin and Kollwitz, one from the East and the other from the West, introduced a variety of choices offered by Western modern art forms to China. They kept exploring the possibility of modernizing Chinese traditional art through their creativity, and their artworks served as the prototypes preceding 100 years of Chinese modern art," Chen said.

Varbanov's "Butterfly," created in 1979, is a "soft sculpture" made in fabrics in the shape of a pink butterfly. Its tender body and wings resemble a blossoming flower, representing freedom and beauty. The sculpture opened the possibilities of contemporary sculpture in China.

Chinese sculptor Yang Dongbai obviously follows the same path with his interpretation toward the extension of sculpture.

Yang builds his "mountain and water," a predominant subject in traditional ink-wash paintings, with slices of colored glass and stainless steel. He depicts the familiar scene of "layer upon layers of green hills" by overlapping materials in his hands, conveying an oriental spirit in a modern way.

Likewise, Pang Maokun fuses something new into his classic and realistic depictions of Western masterpieces. At first glance, the painting "Portrait of Giovanni Arnolfini and his Wife" looks to be a copy of the old masterpiece created by Jan van Eyck (1380-1441). On closer inspection, however, visitors will find Pang has painted himself sitting in the backdrop of the tableau.

"This exhibition is a platform where cultural differences collide and merge," said Chen. 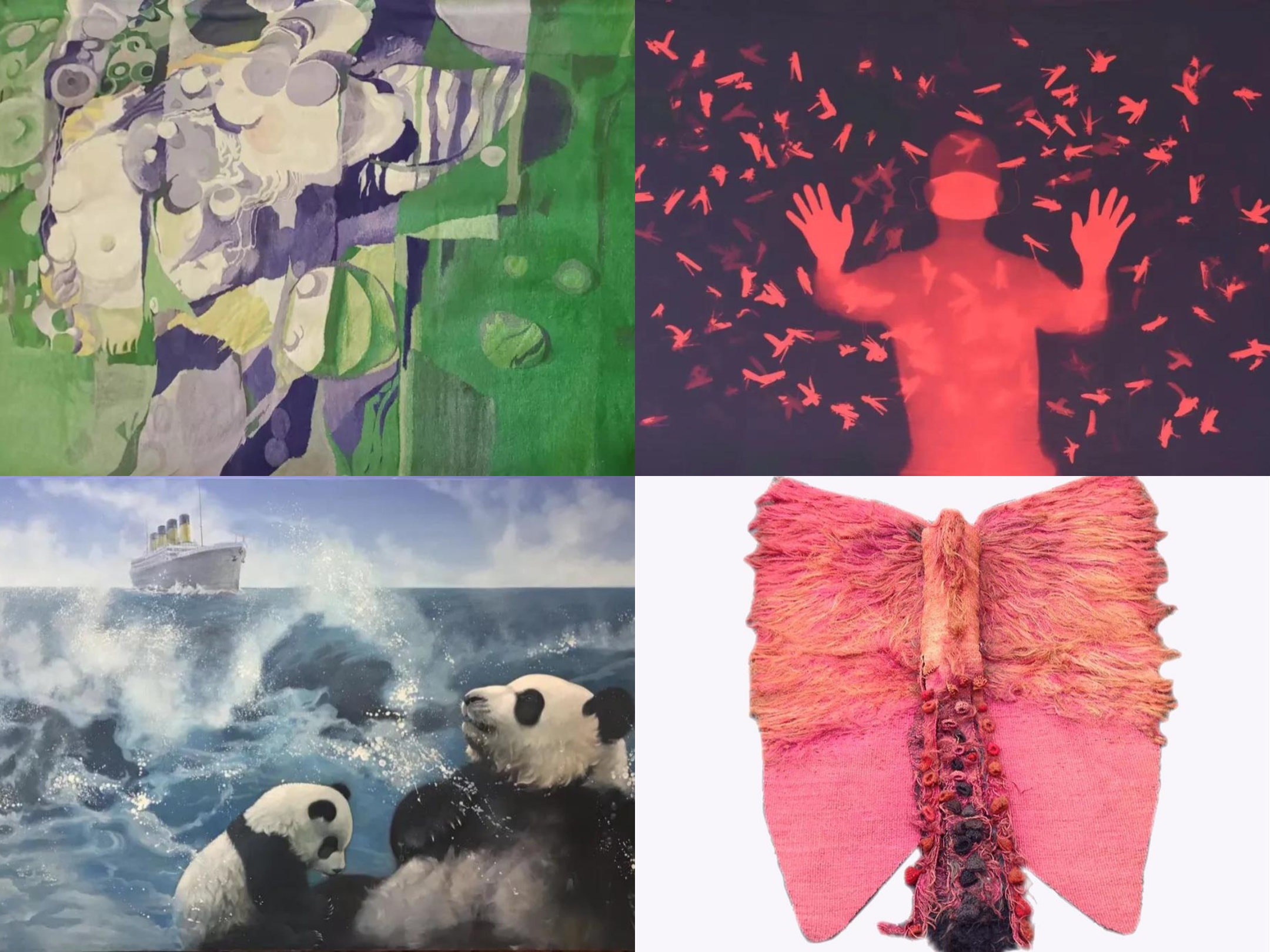