Imaginative ideas to reduce the drudge of garbage sorting

The regulations on garbage sorting that came into effect on July 1 last year in Shanghai have brought changes and challenges to both residents and authorities; but we’ve made them work in the past year with input from the government, residents, volunteers, communities, businesses, researchers and inventors. Some of them have helped turn trash sorting into second nature and make Shanghai a better city. 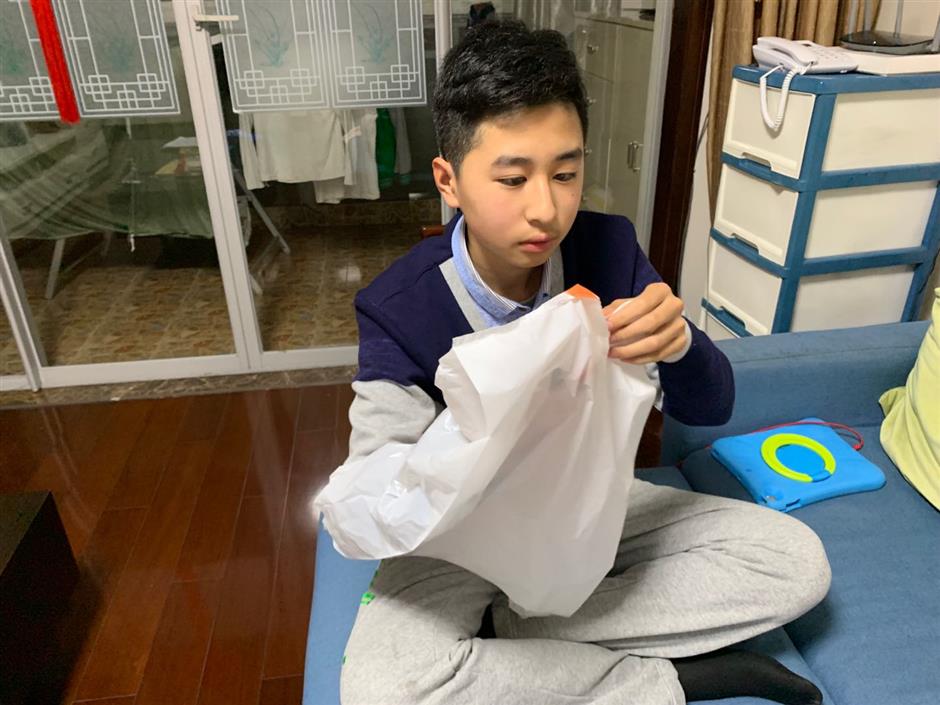 Shi Yuan checks a disposable bag for wet waste designed by him.

Garbage sorting is becoming more convenient for residents, with people from imaginative students to college professors tackling aspects to improve the system.

A supermarket in Songjiang District has now put disposable bags for wet waste on its shelves.

The bags were designed by Shi Yuan, an eighth-grader at Shanghai Wenlai Middle School in Minhang District. They feature an orange belt on one side for people to carry and dispose of wet kitchen garbage without getting their hands dirty.

“It is not a pleasant thing to dispose of wet waste because we have to open the bag to drop the waste into a designated bin for wet waste, and then drop the empty bag into a bin for dry waste,” Shi said. “I got the idea of designing a new bag after the wet garbage I was dumping in a bin one day accidentally dropped on my trousers. It was really disgusting.”

With help from his teachers and his father, Shi devised a belt with one end fixed on the bag and the other end easy to remove so that users could simply hold one end up to tip the waste into the bin. 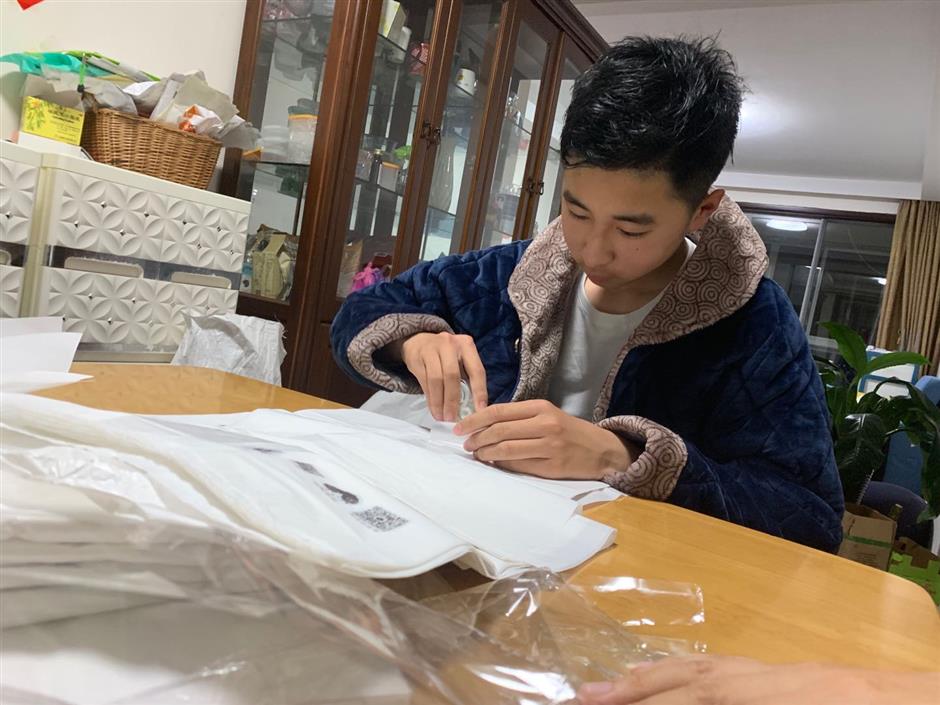 Shi Yuan has improved the design based on feedback from users.

The bags were distributed to residents when communities were promoting garbage-sorting rules, and they became popular because of their convenience. Shi even improved the design based on feedback from users, expanding to carrier bags and flat bags.

“Some people prefer the carrier bags because they are convenient to carry, while others like the flat bags as they are easier when pouring out the waste,” said Shi. “And the color of the belt is bright enough for people to find it easily, even in evening hours.”

The bags are now also available in online stores. Orders have come from across the country as garbage-sorting regulations became mandatory. 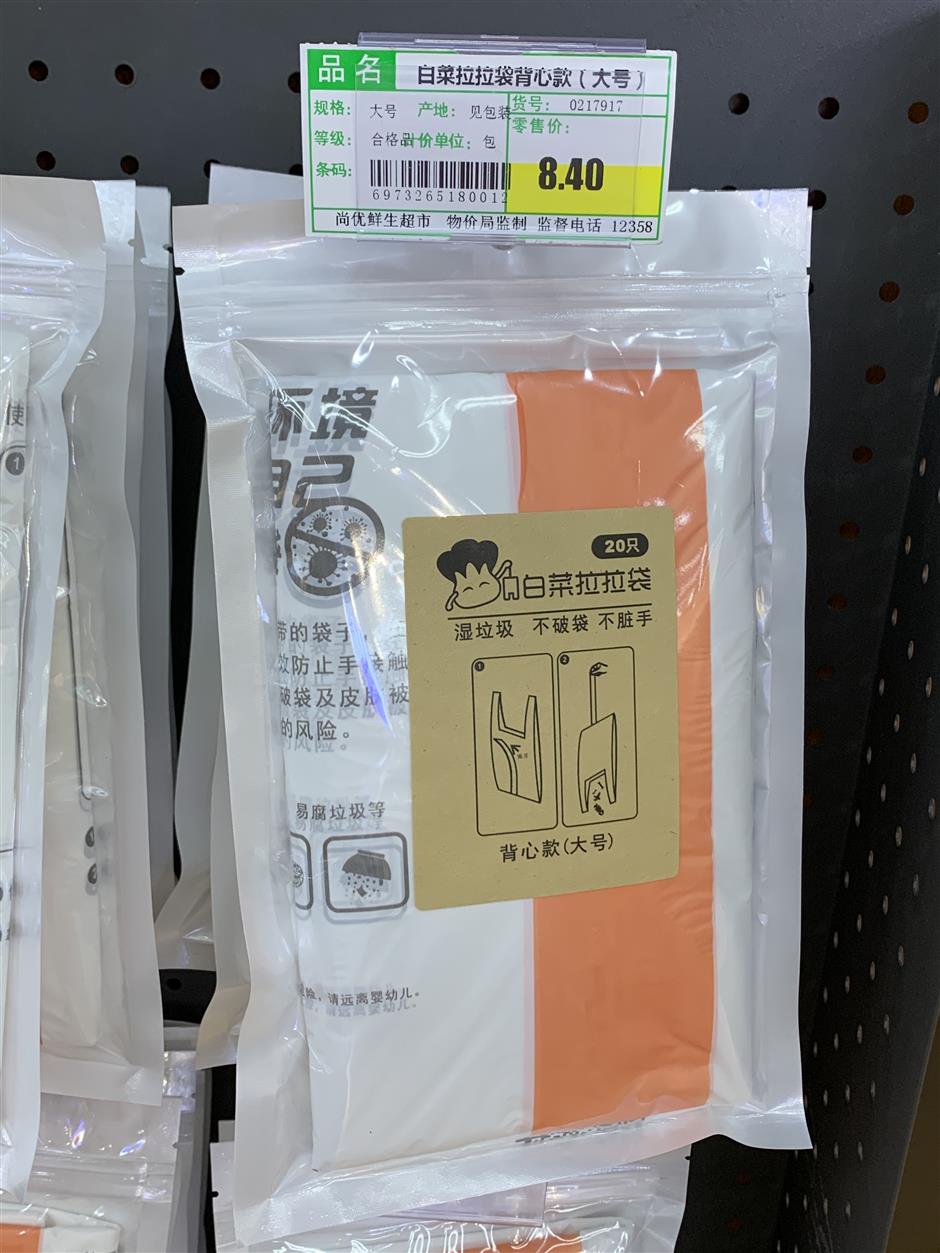 The bags are now available in a Songjiang supermarket.

Researchers in universities have also focused on problems related to the garbage-sorting trend. At the China-UK Carbon College of Shanghai Jiao Tong University, at least three projects are underway.

A joint project between the college and the National University of Singapore is experimenting with new ways to recycle kitchen waste more efficiently.

“In the traditional processing systems, we need to transport the kitchen waste to the processing plants,” said Zhang Jingxin, an associate professor and leader of the team.

“Long-distance transportation costs a lot, with a series of related problems such as exhaust emissions and trash odor,” he said. “In addition, there is sometimes scarce capacity for recycling and regeneration.”

To address those problems, the team developed an in-situ kitchen waste-processing system with an anaerobic digester at its core. The system installed in a 6-meter-long container is also movable.

“After mixing the anaerobes with kitchen waste in certain proportions, the waste disintegrates into marsh gas, which can be transformed into electric and thermal energy via a cogeneration system,” said Zhang.

“The energy can be used to support the system itself, or to charge phones or to serve nearby people in other ways.”

The system has been used in the canteen of the National University of Singapore. It demonstrates that 40 kilograms of kitchen waste can generate enough electricity to charge 1,000 phones.

“The use of anaerobic digestion can minimize the consumption of natural resources and secondary pollution while disposing of the waste, which is helpful in building a sustainable mega-city model,” said Zhang.

He added that the team is now looking for suitable places to test the system in Shanghai. 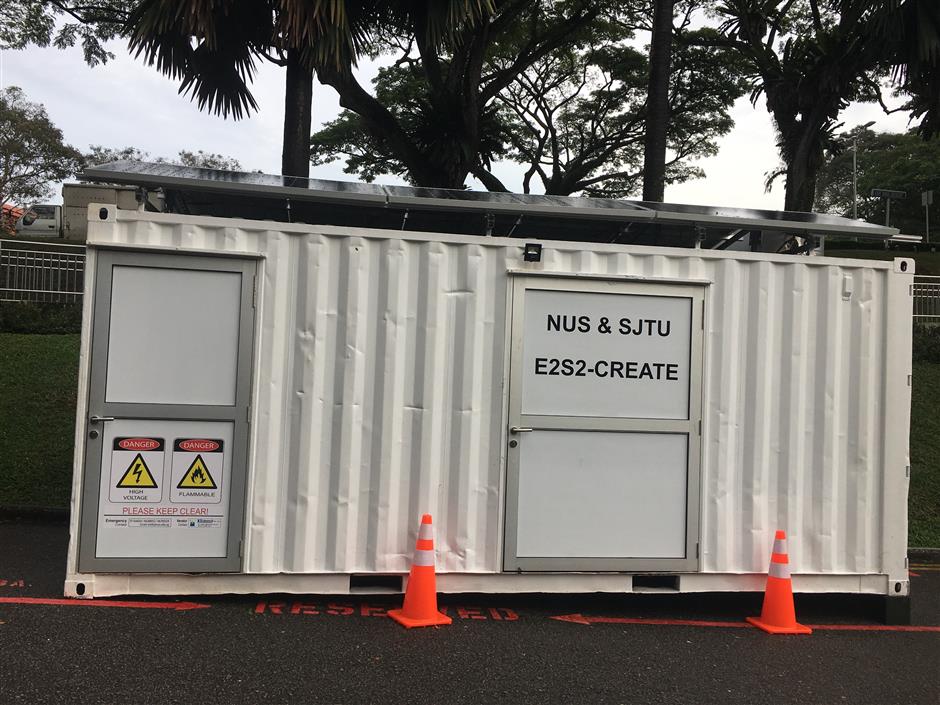 A joint project between the China-UK Carbon College of Shanghai Jiao Tong University and the National University of Singapore has developed a system to recycle kitchen waste more efficiently.

Another joint team by the college and the Singapore university has turned its eyes on the value of discarded seafood shells.

“Seafood has become so popular that people around the world produce 8-10 million tons of crab and shrimp shells every year,” said Chen Xi, an assistant professor from the college and co-leader of the team.

“However, the shells are usually discarded or buried in a landfill,” he said. “During the process of environmental degradation, they release huge amounts of carbon dioxide and oxynitride, fostering emissions of greenhouse gas.”

Chen said the main components of seafood shells, including calcium carbonate, chitin and protein, are natural renewable energy sources that can be used to produce materials for chemicals and drugs.

There is a series of mature techniques to utilize every component in shells. Hence, it’s important to recycle shell waste in environmentally friendly ways to extract chitin, a polymer derivative of glucose.

Chen’s team pioneered a new non-polluting technique to dispose of shell waste by using high pressure carbon dioxide as a green acid reagent to dissolve the calcium carbonate in the shells. During the whole process, only carbon dioxide and water are used to achieve chitin of more than 90 percent purity. Compared with traditional methods, it costs about half and reduces carbon emissions by four-fifths.

In the future, shell waste is expected to become a resource that is capable of yielding substances used in various chemical applications, like petrochemicals. 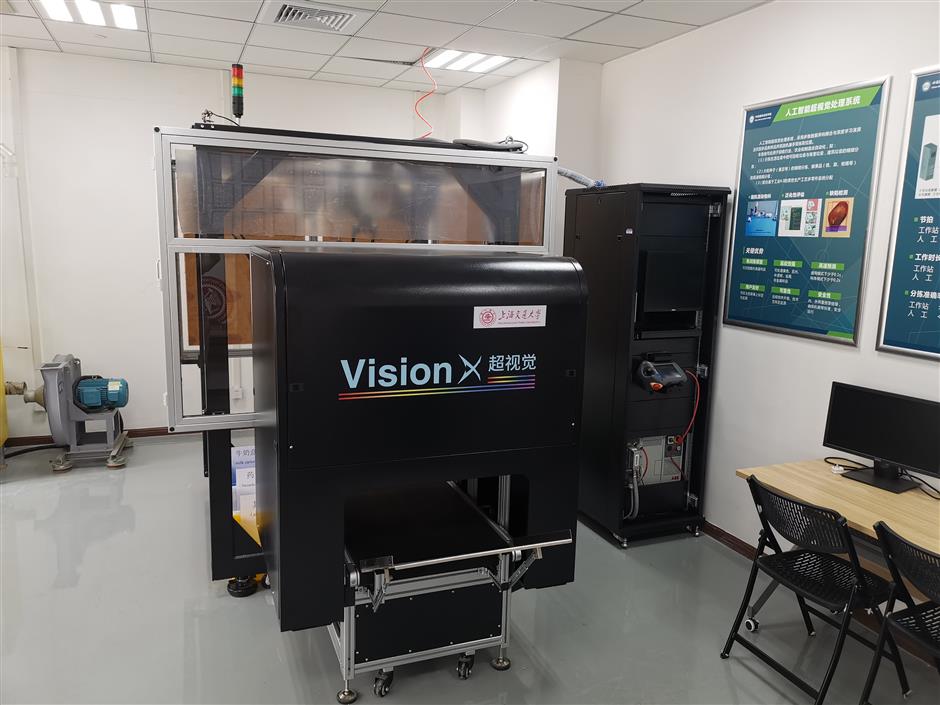 The robotic system called Vision X is expected to free human labor from the boring work of garbage sorting.

According to the team, the machine can identify a piece of dry waste before placing it in its proper container. The device currently boasts a 90 percent accuracy rate and can sort up to 5,400 pieces of waste per hour.

“Workers involved in manual sorting of garbage are exposed to unhygienic environments,” said Li. “Items such as sharp metal pieces or broken glass also pose risks for them.

“It’s getting more difficult to hire such workers given the unpleasant work environment. Robots can be useful for such repetitive, arduous tasks. Two robots operating for 24 hours a day can handle the workload of 54 workers, and with a higher efficiency,” he added.

Li noted that there is a lack of waste-sorting equipment in the domestic market, and the products developed by other countries are prohibitively expensive. Maintenance costs are high as well.

Equipped with three kinds of cutting-edge sensors and other technologies like contour identification, the machine can identify the color, shape and texture of an object as well as its composition. An algorithm controlling a robotic arm can determine the most efficient way to fetch items.

According to Li, the team will cooperate with companies to conduct performance assessments on the robot.

“The components of garbage are different in every city and neighborhood, and these varying elements will impact the performance of the machine,” he said. “The robots need to be trained to work in actual environments.”